One of the largest historical projects of the Russian Iternet, the Hrono.ru website, was closed down in accordance with a requirement from the police of St. Petersburg. 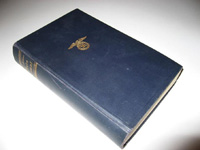 The police found the text of Adolf Hitler’s Mein Kampf (My Struggle) on the website, Itar-Tass news agency reports. The police asked the company, the server of which hosted the website, to block the access to Hrono.ru, and the provider fulfilled the requirement.

The main page of the website still opens, but a click on any link on the page takes a visitor to the website of the Internet provider, which says that Hrono.ru has been blocked.

Hitler’s Mein Kampf was published in 1925 and 1926. In the book, Hitler expressed and explained his ideas about retrieving the power of Germany through the unification of all Germans and the creation of the reign of the German Empire which would be cleared of Jews and people of other nations. About 10 million copies of the book had been sold by 1945.

While he was in power (1933–1945), Mein Kampf came to be available in three common editions. The first, the Volksausgabe or People's Edition, featured the original cover on the dust jacket and was navy blue underneath with a gold swastika eagle embossed on the cover. The Hochzeitsausgabe, or Wedding Edition, in a slipcase with the seal of the province embossed in gold onto a parchment-like cover was given free to marrying couples. In 1940, the Tornister-Ausgabe was released. This edition was a compact, but unabridged, version in a red cover and was released by the post office available to be sent to loved ones fighting at the front. These three editions combined both volumes into the same book.

A special edition was published in 1939 in honor of Hitler's 50th birthday. This edition was known as the Jubiläumsausgabe, or Anniversary Issue. It came in both dark blue and bright red boards with a gold sword on the cover. This work contained both volumes one and two. It was considered a deluxe version, relative to the smaller and more common Volksausgabe, according to Wikipedia.

The book could also be purchased as a two-volume set during Hitler's reign, and was available in soft cover and hardcover. The soft cover edition contained the original cover (as pictured at the top of this article). The hardcover edition had a leather spine with cloth-covered boards. The cover and spine contained an image of three brown oak leaves.