Prosecutors of the military district in St. Petersburg launched investigation into the incident, which occurred at a private party in the city. Musicians of a military band came to the party sporting bunny costumes, like playmates of Playboy magazine, BaltInfo (pictures) website reports. 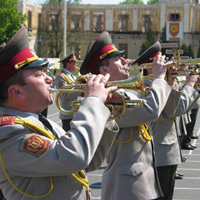 According to eyewitnesses, a military bus stopped near XXXX bar. The members of the band stepped out of the bus dressed in the costumes associated with the logo of the renowned magazine for men. The male musicians grabbed their instruments and entered the bar.

Spokespeople for the administration of the bar confirmed that the military band gave a concert in the bar and that all the musicians were dressed like Playboy playmates. However, they could not specify the military establishment, to which the band belonged.

“A person was celebrating his birthday in the bar and he invited the band for the party. Unfortunately, we do not have the contacts of those musicians,” a spokesperson for the bar administration said.

There are 28 military bands in the St. Petersburg Garrison, and all of them belong to different military agencies.

A member of a local military band said on conditions of anonymity that it was a common practice for the bands to take part in such private events.

“This is absolutely normal. Military musicians often play at restaurants. Everyone is aware of those Playboy bunny costumes. There was such an incident before, when military musicians put on rabbit costumes for a private performance. The band where I play accepted several private orders before too, but we played only in our uniform. You go to a restaurant, play there for 40 minutes or so, and the conductor gives everyone 1,000 rubles ($32) afterwards,” the musician said.