Inhabitants of the Russian village of Berezhki, the Moscow region, witnessed the construction of a new Versailles Palace in their region, which continued for five years. The territory of 36 hectares is surrounded by a two-meter fence, which neighbors with Istra Reservoir. 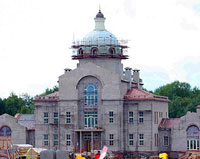 A massive, white, spacious palace is being built behind the fence. The palace is nine thousand square meters. There is a huge hall inside the palace. Two wide staircases with golden railings made of gilded oak look very luxurious. The marble floor is covered with rose-colored carpets.

“There are nine bedrooms and three halls on the second floor. And almost all the left side of the building is a huge swimming pool with solid stained-glass windows instead of walls and ceilings,” says the guard.

“The manor may cost about $70 million. The cost of one square meter of such estates could be up to $ 2 thousand,” says Nadezhda Volokhova, the deputy director of real estate agency Usadba.

Earlier this territory belonged to the state farm Lesnye Ozera. Then the state farm underwent the process of privatization and later the owners of the property sold it to Ziyad Manasir, a Jordanian millionaire and the head and co-owner of a major construction company Stroygazconsalting.

Ziyad’s fortune is estimated at $500 million by Forbes. It is still not clear whether Ziyad is going to live there by himself or to make this manor a hospital for his employees.

“The company may use this manor as a place for business meetings or for corporate parties or it may become a summer residence of Mr. Ziyad,” says Victoria Mironova, the head of public relations department in LLC Stroygazconsalting.

Read also: “Cultural heritage in ruins: is there a future for Russia’s historic mansions?”