A young woman from the city of Yaroslavl, a student, may face a prison term for her explicit photo shoot which was held on a local graveyard. The explicit photos, which were posted on the Russian Internet, depicted the woman in provocative poses on tombstones. The woman also relieved herself on the graveyard and took pictures of the process too. 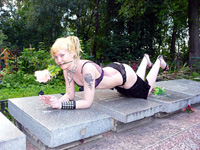 The photo session containing elements of pornography appeared on a number of Russian entertainment websites. The woman, named only as Julia, is pictured standing on the fence of a grave with a wreath and a cross between her legs, lying in her underwear on a tombstone and even urinating on graves. Many visitors of the websites were shocked to see such pictures and they reported them to the police.

“The woman and the photographer have been identified. A criminal case has been filed in accordance with Part 1, Article 244 of the Russian Federation Penal Code - “Desecration of Graves.” We thank everyone who showed their civil position on the matter and reported the crime,” a statement from the local police department said.