Every year hundreds of brave people who enjoy extreme tourism visit unusual locations on Earth only to experience unforgettable sensations. And they are ready to pay a lot of money for it. 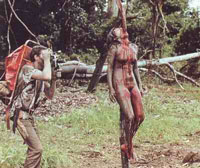 Russian millionaires are often offered to visit the North Pole. Such a trip on an ice breaker usually costs about $12,000. Of course, they are not allowed to bathe in the Arctic Ocean.

However, a large swimming pool filled with the water from the ocean overboard is arranged on the deck for them. The most exciting moment of the whole journey is collective photo session on ice near the ice breaker.

For those who do not have millions, special survival tours to the Siberian taiga are offered. For $150 a day tourists are provided with the unique opportunity to walk the whole day long in taiga together with a guide and eat roots, berries and nuts.

A new term - 'dark tourism' - has appeared in the tourist industry recently. More and more tourists are eager to visit places of catastrophes and disasters which killed plenty of people.

Sightseeing tours across New York necessarily include a visit to the ruins of the World Trade Centre destroyed in September 2001. After this tragedy the price of tours to New York increased considerably.

According to officials from travel agencies, after the natural disasters, such as the tsunami in Thailand or the hurricane in New Orleans, lots of people ask to arrange a tour to the disaster-hit location. They usually say that they want to see everything with their own eyes.

Sometimes the situation turns out to be very funny. Vladislav Anikeev, a man from the Russian city of Tula, has always dreamt to visit a cannibal tribe. And one day his dream came true. He went to Kalimantan, Indonesia, to the place where scull hunters live. The group of tourists finally found themselves in the village inhabited by cannibals.

The locals willingly told the details of their inhumane craft and shared their secrets and technology of scull processing and showed how to do it. The hospitable aboriginals even offered to buy some souvenirs made of their enemies.

However, how surprised Vladislav was when at the end of their tour he entered the chief’s house and saw the chief of the tribe putting on a pair of jeans and a T-shirt.

Finally it turned out that everything the tribe showed to the tourists was nothing but a performance. Scull hunting has been strictly forbidden since 1861. Since that time the tribe has become quite civilized and has taught themselves how to get money from the habits and customs of their predecessors.