Doctors refuse to operate boy with decayed lung for free

A two-year-old boy named as Vadim, who had his lung absolutely decayed, was delivered to one of Moscow hospitals. The urgent operation was needed, but the boy’s parents did not have enough money to pay for the operation. So the doctors had nothing to do but to check out the seriously ill patient from the hospital. 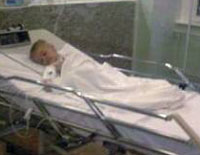 Doctors refuse to operate boy with decayed lung for free

Vadim’s parents are guest workers who came to Moscow for earnings. They brought their son to Moscow's Tushino District Hospital when his condition became life-threatening. When the doctors examined the child they could hardly hold back the tears.

It became known that the boy lived with his parents like a wild animal. Nobody fed him. He ate the things he could find and nobody paid any attention to him.

Even very experienced experts at the intensive care unit were shocked with the results of Vadim’s medical examination.

“It seems that the boy had inflammation first and then started to develop a putrefactive processes in his lung. It is really hard to believe that the parents did not notice that,” says one of the doctors.

Vadim was operated urgently. The doctors were really surprised how hardy the tiny organism was. The child started to recover very quickly. He started eating again.

“He was eating all the food he was given. Now Vadim needs one more operation. It is necessary to restore vacuum in his pleural cavity and to unfold the lung,” the doctor says.

“We have contacted our colleagues from other hospitals where the necessary equipment is available, but nobody agreed to help us. Such operations usually cost a lot. Besides, the child does not hold the Russian citizenship. We explained the situation to the parents but they have not managed to find the necessary amount. Such an operation for a non-Russian citizen may cost several thousands of dollars. Moscow doctors refuse to carry out such an operation for free.”