Former President of the USSR, Mikhail Gorbachev, and Russia’s well-known musician and singer, Andrey Makarevich (the front man of Russia’s legendary Mashina Vremeni (Time Machine) rock band) released their joint CD album. The album, titled "Songs for Raisa," is dedicated to the late wife of the Soviet president, Raisa Gorbachev. The CD appeared as a lot at a charity auction, and would not be available through retail networks, Interfax reports. 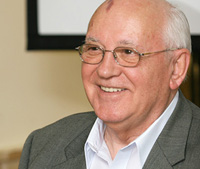 “There are seven ballads, which Raisa Maksimovna [Gorbachev] loved. I performed them myself with Andrey Makarevich accompanying me. We put it up for our charity auction in London,” Mikhail Gorbachev told reporters.

The CD was released to coincide with the tenth anniversary of Raisa Gorbachev’s death. She died of leukemia on September 20, 1999.

Pavel Palazhchenko, the chairman of the press service of the Gorbachev Foundation, said that Mikhail Sergeyevich performed one of the most touching ballads at the auction at the request of 347 people present. “The performance of the ballad – Old Letters – was greeted with delight and a storm of applause,” the official said.

Russia's Novaya Gazeta posted Gorbachev’s performance of Old Letters on its website. Click here to listen to the recording.

The CD was sold for $165,000 to a British philanthropist, who wished to remain anonymous. The auction, which was held in London for the fourth time, collected 1.700,000 pounds sterling. The funds will be used to help the children suffering from leukemia, Mikhail Gorbachev said.