The word 'pajamas' is of Turkic origin. These clothes originally appeared in Europe during the first half of the 19th century. The Europeans borrowed them much from the East – it was a fashion to relax with hookah, coffee and sweets. Pajamas were the most fitting clothes to relax in that way – baggy shirts and trousers of light fabric. We do not know exactly when men started to sleep in pajamas, but they displaced night men’s shirts during the sixties of the 19th century already. At that time, the manufacturing of pajamas began. 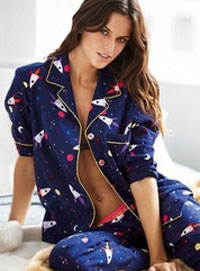 Coco Chanel was a great rebel who set women free from corsets and bustles and clothed them with trousers, sweaters and cardigans – the garments which were originally worn by men. Chanel paid her attention to pajamas as well. She started to make pajamas of luxurious bright fabrics – satin, patterned silk, thin Indian cotton – and offered these haute couture pieces to her clients. But many women regarded this men’s “sleeping suit” provocative and appropriate only for courtesans and actresses.

It were actresses (but not courtesans) who made pajamas popular. A silent film star Claudette Colbert was the first to appear wearing silk pajamas by Chanel in a film. Marlene Dietrich and Greta Garbo followed her. Since that time pajamas are present in women’s bedrooms and do not lose popularity.

Modern pajamas can not always be called pajamas. Sometimes they resemble a gymnastic suit, sometimes they consist of a top and a pair of shorts instead of trousers. Now pajamas are considered the home clothing in the first place. They are made of many different materials, but the classic silken baggy pajamas seem to be attractive for men and women alike.