Russian cosmonauts not allowed to use US toilets on board ISS

The commander of the international crew on board the International Space Station, Gennady Padalka, said that he was not allowed to use the bathroom and an exercise bike of US astronauts on the ISS. The space segregation was reportedly caused with the payment, which Russia collects from space agencies of other countries. 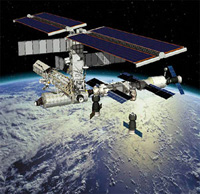 Russian cosmonauts not allowed to use US toilets on board ISS

Padalka said in an interview with the Novaya Gazeta prior to his flight to the ISS that the station crew was being separated over the national principle. It just so happens that Russia has found itself in an opposition to other partners of the International Space Station.

US astronauts and Russian cosmonauts have had wonderful relations since his first mission in 1998 and further up to 2005, Padalka said. Things changed after space missions were reorganized on a commercial basis.

“Only medical operations on board the ISS have not been divided because the safety of the crew depends on them. The flight possibilities connected with potentially dangerous situations, such as fire or depressurization, get everyone involved equally too. Everything else has been divided. Spacewalks will now be conducted separately, in accordance with Russian and US space programs. I believe that Michael Barratt (the next commander of the ISS) will be the last astronaut who will make a spacewalk wearing a Russian spacesuit. We were even recommended to use our own national toilets,” Gennady Padalka said.

“We have been full-blooded partners with the US astronauts during 1998-2005. I have no comparison for the present-day situation,” the cosmonaut complained.

The ISS commander believes that the problem appeared as a result of the Russian bureaucracy, when Russia started charging other space agencies for the resources used by their astronauts. He added that the ISS partners began to misunderstand Russia because of that.

“The cosmonauts are above the squabble, no matter what officials may decide. We are grown-up, educated and good-mannered people, and we can use our brains to create the necessary human atmosphere in space,” Padalka said.