Sofia Rudyeva, an 18-year-old model from St. Petersburg, won Miss Russia 2009 beauty contest. In addition to the title and the crown, Sofia will receive a 100,000-dollar prize. Her other prizes include a romantic trip for two people to Stockholm and an opportunity to participate in a catalogue photo shoot for a cosmetic-making company, RIA Novosti reports. 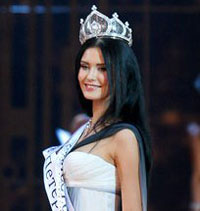 Svetlana Stepankovskaya from the Krasnodar region of Russia took the second place, whereas Ksenia Shepilova from the town of Kokhma, the Inanovo region, came third. In addition to the tittles, the girl obtained a unique opportunity to choose any educational institution of the world where they would like to study free of charge.

Sofia Rudyeva has been in the modeling business for several years already. She took part in a number of professional fashion shows.