Being a real man is the hardest occupation of all

There are a number of occupations that can be categorized as male occupations only. For example, a Norwegian whaler, a Soviet smelter, a Japanese samurai, etc. Many women think of such men as the only true men that have the genuine nature of a real man. There are many of such women who share this opinion, but they may not even realize that they think it wrong. 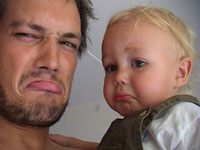 Being a real man is the hardest occupation of all

All genuine feminine women love genuine masculine men. What is the definition of masculinity, though? Is there a formula to it?

Men have their own notion of manhood, which may often differ from what most women think on the matter. Some men think that it is very man-like to spit in public on the street, others believe that it is very masculine to scratch and touch the groin area so that other people could see it. What’s next? It’s very macho-like to smell like a rat, to breathe tobacco and drink wine 24/7.

As a matter of fact, masculinity, which seems to be a very attracting factor for many women, is different with every individual. A male often takes all attempts to make females dislike him. He acts rude, he farts and burps in front of other people and makes them pay attention to it, he tells dirty jokes and refers to other women as ‘chicks’.

Most women would hate it, but some of them can develop an attraction even to this type of men. They fall for something else, though.

It may often happen that the image of a macho man is just a mask that a man wears to hide his weak character. As a rule, men hide real-man traits somewhere deep inside and prefer not to expose them to everyone. A man may not look like a macho man, but if he works had to maintain his family, his children, if he is responsible for his loved ones, he can absolutely be categorized as a real man in the sense of this word.

Here are the traits that define a real man in the world today: a man takes care of his family and is distinctive for his reliability. A man must be responsible for others, if he wants to become a real man.

It is extremely important for a man to be a socially realized individual. This aspect is much more important for men than it can be for women. If a man does not feel that he is fulfilled at the moment when he turns 30, if he feels that he has not achieved a social status, he begins to drink and resorts to other ways of self-destruction.

A man who changes his partners all the time is not a real man at all. A woman must feel that she can rely on her man, but if he swaps sex partners every other day, he can not be referred to as ‘reliable.’ Such men simply waste their man power. A womanizer is a careless man; he is lost in a way, which indicates his weakness and helplessness. Women prefer to avoid this type of men.

Speaking of men’s responsibility, what does it mean to be a boy? It means not to cry, not to complain and not to ask. A boy is supposed to be strong; he is supposed to be able to defend himself. What do parents usually tell their sons ?

“You need to be patient!”

“Why didn’t you hit him back when he hit you?”

A boy begins to realize from early childhood that he is not supposed to feel anything or display his feelings about anything. He begins to realize that he has to be ashamed of such things. Being a man means being hard-hearted. As a result, women have to deal with cold-blooded unemotional men of whom they always complain.

When a man has a family, he takes on a new responsibility to maintain his wife and children. If he does not cope with it, his wife and everyone else will think of him as a wreck. If he works hard, he spends all his days at work, he hardly sees his wife and children, he loses interest in sex and becomes a very bad man in the eyes of his wife again.

Men become used to constant stresses, they develop nervous breakdowns and start having heart attacks in their forties. Most men can not relieve their tension just as naturally as most women do: they can not complain to their mothers or share everything with their friends. Most men can only pretend that their problems do not actually exist, that everything is fine and normal. It is easy to be a man? Not at all. One has to be very strong indeed to become a real man.