The Ox replaces the Rat and opens the new 12-year cycle of the Chinese Zodiac. The Chinese describe the Ox as a strong and stable animal. At the same time, if the Ox needs to accomplish his goal, he will do it at all costs, even if he has to use destructive force for it. The colors of the year 2009 are red, which adds more aggression, and yellow, which requires distinction. In other words, the Year of the Ox is going to be a contradictory year balancing between conservatism, novelty and aggression. 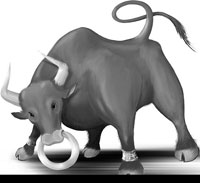 Astrologist Denis Verbitsky believes that the Year of the Ox will continue the tendencies of the Year of the Rat – pragmatism and utility. The first half of the year will fall under the influence of the opposition between Saturn and Uranus. The opposition of the two planets will lead to conflicts between conservative and new ideas. One has to be prepared for deceit and fraud and thus be careful about everything.

The Year of the Ox is going to be a rather complicated time period for Russia . It will become obvious by the middle of the year that the country does not have any special reserves to support its economy. Russia will have to return to the experience of the year 2004 to extricate from the crisis.

The nature of the Ox suggests a way out of the situation: one has to work hard and not hope for great success. Russia has had a taste of careless life, but it must not follow illusions now: the sad experience of the 1990s can become reality again.

The Ox embodies prosperity and family happiness. That is why, the majority of the Chinese joined their families for New Year festivities. All the Chinese believe that the Year of the Ox will bring them only good, for the Year of the Rat was quite a difficult experience for the nation: the mammoth earthquake that struck China’s Sichuan Province, the Tibet unrest, the milk powder scandal, heavy snowfalls and anti-Chinese statements during the Olympic flame marathon. The Chinese economy suffered considerable damage because of the global economic crisis: many factories were closed due to low demand on their products.

China will go on national holidays from January 26 to February 1. Millions and millions of Chinese will travel to see their relatives and friends, creating the biggest human migration in the world.

People born in the Year of the Ox are patient and not really talkative; they inspire confidence in others. They tend, however, to be eccentric, and bigoted, and they anger easily. They have fierce tempers and although they speak little, when they do they are quite eloquent. Ox people are mentally and physically alert. Generally easy-going, they can be remarkably stubborn, and they hate to fail or be opposed. They are most compatible with Snake, Rooster, and Rat people.

The Ox works hard, patiently, and methodically, with original intelligence and reflective thought. These people enjoy helping others. Behind this tenacious, laboring, and self-sacrificing exterior lies an active mind.

The Ox is not extravagant, and the thought of living off credit cards or being in debt makes them nervous. The possibility of taking a serious risk could cause the Ox sleepless nights.

Ox people are truthful and sincere, and the idea of wheeling and dealing in a competitive world is distasteful to them. They are rarely driven by the prospect of financial gain. These people are always welcome because of their honesty and patience. They are reputed to be the most beautiful of face in the zodiac. They have many friends, who appreciate the fact that the Ox people are wary of new trends, although every now and then they can be encouraged to try something new. People born in the year of the Ox make wonderful parents and teachers of children.

It is important to remember that the Ox people are sociable and relaxed when they feel secure, but occasionally a dark cloud looms over such people and they engage all the trials of the whole world and seek solutions for them.