Many of us prefer not to give alms to the poor. People tend of believe that many of those begging for money in the streets work for criminal groups. Even if they beg for themselves, they will either drink away this money or spend it on drugs. Moreover, beggars may not be grateful for what people give them and ask for a bigger note, throwing coins away. It may also happen that beggars would scorn at someone who gives them food instead of money. 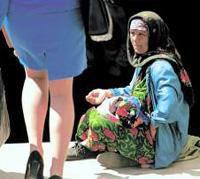 A typical medieval beggar is usually portrayed as an elderly man with a long beard dressed in a robe and holding a walking stick in his hand. Modern-day beggars are strongly associated with revolting dirty, smelly and drunk homeless individuals picking empty bottles around. Other associations include: gypsies wearing gold jewelry and selling cell phones, a healthy young man who begs for money saying that his grandmother or mother has just died, etc. The look of the beggars has changed too: beggars look at other people with hatred in their eyes.

Giving alms used to be considered a certain type of beneficial exchange: you give money for food and become aware of your own big heart and generosity.

Islam has an artful law about beggars: those who do not give alms to the poor near mosques bring their homes to shame. Those, who ask from the heart, relieve givers of their sins.

The poor used to make an important social group in many countries. Nowadays, the general public despises beggars – people are taught to hate and avoid them from early childhood. However, there are people who regret not giving anything to a beggar they encountered on a bus stop or in a commuter train. A human being, who begs for money, feels humiliated; they swallowed their pride and dignity and deserve at least a small amount of pity.