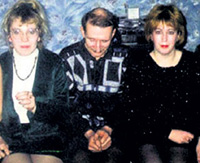 Vladimir Baobabov was scared of girls in his youth. When he was celebrating his 37th birthday, he asked his father not to hurry him with marriage, for he may wed a woman who would limp, be blind or have a criminal record. It just so happened that the man predicted his own future: life made him meet these kinds of ladies.

Vladimir met a German woman, Lisa Meltzger, on the internet. The company, in which the man was working, asked him to find news about foreign developments in the field of medical equipment. Vladimir came across a website advertising wheelchairs and saw a photograph of a woman sitting on one of them. He decided to drop her a message to find out if the wheelchairs were good enough.

“The sellers sent me the price list and the address of the woman on the photo. She then became my Elizabeth,” the man said.

A call from Russia caught the German woman flat-footed. He asked a translator to say several compliments to her, but the woman thought that it was a joke and hung up the phone. The man did not give up and the woman eventually started to communicate with him. Her tragic fate touched the Russian man to the very roots of his being. It turned out that Liza lost her husband, daughter and the luxury to walk in a car accident.

“She put a cross on her femininity. It took me 6 months to prove it to her that she was an attractive lady. She was the first woman, who made me experience this great feeling,” Vladimir said.

The man was working on two jobs to be able to buy Lisa a computer for their communication and hire a German language tutor for himself. The German woman began to study Russian and was saving her pension to welcome a guest from Russia at her home in Germany .

“When we first met, it turned out that she was taller and older than me. I came to Germany with my cousin, who knew some German. She took him for me and showered him with kisses and did not show much interest in me. We still laugh about this story,” Vladimir said.

The man brought his German woman to Russia after his father died. He had a large three-room apartment in the center of Chelyabinsk. The couple did not rush to marry each other. Vladimir would often take Meltzger out to attend various city events for disabled individuals. Meltzger saw a young woman accompanying her one-legged mother at one of those events.

“Vera reminded me of my daughter, even their smiles are alike. We exchanged telephone numbers and began to maintain our friendship. Vera finished serving her prison term not so long ago – she stole a fur coat from a local theater. She did that for her mother, who had nothing to wear for winter,” the woman said.

Elizabeth soon found out that Vera was flirting with Vladimir behind her back. Vera was pregnant, but Meltzger did not make a scandal out of it. She offered Vladimir to let Vera live in their apartment. Vera gave birth to a baby-girl in five months. It was a great pleasure for Liza to mother a baby.

“I loved them both equally. Elizabeth was conquering me with her femininity and wisdom, whereas Vera was so passionate and life-loving. I never thought that I would cheat on them. I went on a business trip to Poland afterwards, where I met Elzbeta. She was blind, walking with her guide - dog . When I returned, I told everything to my women honestly. They did not speak to me for a week. Afterwards, they both told me that I could invite the Polish woman to visit us,” Vladimir said.

Elzbeta gave birth to a baby-boy, they named him Jan. The international family moved to a five-room house at the end of summer.

“I know that people criticize me, but I am the happiest man in the world,” Vladimir says.

Russian laws do not stipulate any criminal responsibility for civil polygamous marriages. A man can be a civil husband to as many women (including foreigners) as he wants to in Russia.