Ten most horrible places on Earth

1. The Mutter Museum of Medical History. The museum was founded to educate future doctors about anatomy and human anomalies. It is a museum of pathologies, ancient medical tools and biological exhibits. The museum is known for its extensive collection of skulls. It also has various unique exhibits, for example, the dead body of a woman which turned into soap in the ground where she was buried. One can also see there the Siamese twins sharing only one liver, the skeleton of a two-headed child and other hideous exhibits. 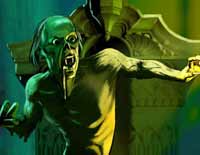 Ten most horrible places on Earth

2. Truk Lagoon, Micronesia. A big part of the Japanese navy now rests on the floor of Truk Lagoon in Micronesia, south-east off the Hawaiian Archipelago. The bottom of the lagoon, which Jacques Yves Cousteau explored in 1971, is all covered with fragments of warships that sank in 1944. The lagoon has become a great attraction for divers, although many fear the crews that never left their action posts. Destroyers and aircraft grew into coral reefs, but many divers never return from their underwater journeys exploring the reefs.

3. The witchcraft market in Sonora, Mexico. Witches in Sonora sit in tiny booths and promise to relieve clients of poverty and infidelity for only $10. The market is open every day for pilgrims from Mexico and foreign tourists, who come to Sonora to find out at least something about their future. Anyone can buy there mysterious potions, snake blood and dried humming birds to tame their luck.

4. Easter Island, Chile. This island is one of the most mysterious places in the world. The island is world-known for its giant statues carved of stone. The giant statues look into the sky as if they are begging for mercy. Only stone statues know where their creators went. No one on the island knows the art of statue-making. No one knows how it could be possible to make those 20-meter high and 90-ton heavy giants. The statues used to be transported 20 kilometers far from the quarry, where ancient sculptors worked.

5. Manchac Swamp, Louisiana. The place is also known as the ghost swamp. The swamp is located near New Orleans. Legend has it that the swamp was cursed by a voodoo queen when she was held captive in the beginning of the 1920s. Three little villages disappeared there in a hurricane in 1915.

6. The Catacombs of Paris. The walls of the long corridor are “tiled” with skulls and bones. The air is very dry, carrying only a slight hint of decay. When you get into the catacombs underneath Paris you begin to realize why Viktor Hugo and Anne Rice wrote their famous novels about these dungeons. They stretch for about 187 kilometers underneath the whole city, and only a small part of them is open for access. They say that the legendary underground police patrol the catacombs, although legions of zombies and vampires seem to be more appropriate at this point.

7. The Winchester House in San Jose, California. The mystery house is a colossal construction, a home to many myths and prejudices. A fortune-teller once told Sarah Winchester, an heiress to an armory company, that ghosts would haunt nut her throughout her life, so she needed to leave Connecticut and travel to the west, where she would need to build a huge house, the construction of which would have to continue as long as she was alive. The construction began in San Jose in 1884 and did not stop for 38 until Sarah died. The house is currently inhabited by the ghosts of her insanity: stairways into the ceiling, doors in the middle of walls, chandeliers and hooks. Even those who never believe in ghosts say that they heard or saw something strange during their visit to the house.

8. Mary King’s Close in Edinburgh. These are several streets with gloomy and hideous past, hidden in the medieval Old Town in Edinburgh. This place, where victims of plague would be left to die in the 17th century, is known for its poltergeists. The tourists visiting the weird location say that something invisible touches their arms and legs. Locals say that it is a ghost of a girl named Annie, whom her parents left there in 1645. A new large building was built in Mary King’s Close a hundred years later. The close was open for tourists in 2003.

10. Chernobyl, Ukraine. Tourists can visit the abandoned town of Pripyat and see its restriction zone. Thousands of people left their homes and abandoned their possessions when the Chernobyl disaster struck. Toys can be seen scattered in kindergartens, newspapers are resting on dinner tables. The Chernobyl disaster area is now open for tourist visits – the radiation level there is safe. As a rule, a bus trips begins in Kiev. Afterwards, tourists walk to the Chernobyl nuclear power plant, see the Sarcophagus and then go to the town of Pripyat.