Adolf Hitler was mentally unbalanced because he had only one testicle

The man, who saved the life of Nazi leader Adolf Hitler in 1916, unveiled the shocking truth about German Fuhrer’s health. The military medic said that Hitler had only one testicle. 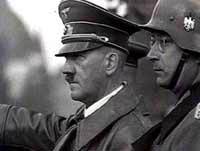 Adolf Hitler was mentally unbalanced because he had only one testicle

Johan Jambor, a war veteran, shared the secret of Hitler’s intimate anatomy with a Catholic priest many years ago, and the latter wrote down his words. The document saw the light 23 years after Johan’s death in 1985.

The unveiled note says that Johan was confessing to priest Franciszek Pawlar and relived the horrors of WWI. The medic particularly confessed that he had saved the life of Adolf Hitler many years ago.

“It happened in 1916, during the Battle of the Somme. Johan and his friends were picking up injured soldiers for several hours. Johan Jambor remembers that he found Hitler among them. They called him the Screamer. He was very noisy and was constantly screaming ‘help!’ His abdomen and legs were all covered with blood. Hitler was wounded in the stomach and lost one testicle in the fight. As soon as he saw the doctor, he immediately asked him: “Will I be able to have children?” the priest’s note runs.

When Nazis came to power in Germany, Johan Jambor began to suffer from nightmares. He felt guilty of having saved the life of the tyrant who exterminated millions of innocent people.

The rumors of Hitler’s monorchism (a medical term designating the absence of one testicle) are not new at all. There is even a song about such a peculiarity of Hitler’s genitals. The lyrics are:

The song was long reputed to be propaganda-oriented, although military reports confirm that Hitler had been wounded in the groin indeed during the Battle of the Somme. The official biographers of the Nazi leader mention the leg wound too. They even specify the date when it happened – October 16.

Johan Jambor’s statement is the first publicized confession of an individual who personally examined Hitler.

As a rule, men suffer a huge stress if they have their genitals injured. Such traumas may often trigger the inferiority complex, which men may try to compensate in other spheres of life. The absence of one testicle does not affect the health of a man: one testicle can perfectly execute all of its functions alone.

It is an open secret that Hitler could never boast of having robust health. Biographers note that he was most likely weak as far as his potency was concerned. The Fuhrer would often cross his hands over his crotch in public as if he tried to hide his intimate zone from other people’s looks. Psychologists say that such gestures are typical of those men who have problems with their potency.