Russian physiologist Leonid Kitaev-Smyk has stated that most male diseases are caused by women who adhere to provocative clothes and behaviour. As a result, the Western civilization gradually turns into the society of sexually unsatisfied men and eventually unsuccessful and physically unhealthy men, the scientist considers. 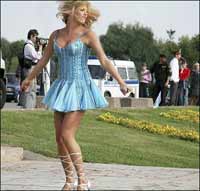 US researchers published results of their 30-year-long work. It suggested that 80 percent of men aged over 60 who died for different reasons had prostate cancer apart from other diseases. Every third American and European male aged over 30 has problems with potency and the prostate gland. The situation is quite different in the Muslim East. Arabs have the lowest rates of prostate cancer. Scientists considered that it depends on climate and meals and studied carefully the Oriental diet and tried to find any food with preventive action. They failed, although the clue is quite obvious.

Since the start of the sexual revolution women of the developed world took to wearing revealing clothes, while Oriental women still wear gowns and yashmaks, said Leonid Kitaev-Smyk, the senior research officer of the Russian Research Institute of Culturology of the Russian Academy of Sciences. In the street men cannot satisfy all desires they have. They see naked parts of the body – miniskirts and transparent tops. The modern fashion gives rise to male lust. So there is much lust, but little satisfaction. What does it have to do with the disease? We can draw an analogy with the fauna. If a male is weak, a female will see it and reject the male. This male cannot win a female, for there is a defensive mechanism in nature – this male suffers from prostatitis and impotency.

Nowadays, 70 percent of impotency is a natural defensive reaction to stresses caused by constant unsatisfied arousal. But this reaction is rather long-standing.

Thus, women dig a grave for men’s health with their bare legs and low-cut dresses. Every nice girl going on a date with a sexy top on will make only one man happy and a dozen men on her way will suffer from her revealing looks. In this case strippers are weapons of mass destruction; they have already turned the Western civilization into the society with limited erection.