To look beautiful and fabulous is a professional duty for every star. Sometimes celebrities may go too far in their attempts to remain eternally young. 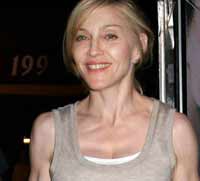 Many of Hollywood celebrities are addicted to physical exercises, diets and plastic surgery. Fitness has always seemed to be least harmful among these manias. However, if sport does not damage people’s health as starvation and operations do, it may distort their looks.

Madonna is known for her addiction to healthy lifestyle and sports. Indeed, at age 49 she looks more attractive than 20-year-old celebrities beauties do. It took her great efforts to achieve such a result – decades of choreography, strict diets, several hours of yoga and pilates a day. A low-fat diet and exhausting physical exercises (Madonna does karate, swimming and weight-lifting) resulted in nearly transparent skin and masculine arm muscles which the pop-diva has.

Another “well-shaped” American is a 42-year-old star of Sex and the City, Sarah Jessica Parker. Five years ago the actress astonished the public when she got back into shape only a month after child-bearing. Not everyone admires her looks now. Every-day jogging and pilates led to thinness and aging. Due to the low level of subcutis, Parker’s veins and muscles are distinctly seen on her arms, whereas weight-lighting made her breast muscles look masculine.

Actress Renee Zellweger suffered from constant weight-loss most of all. For the film Bridget Jones’s Diary that made her a famous and popular actress with millions of people, she had to put on 15 kilograms, and then to lose weight rapidly. In Chicago (that was made a year after) she showed her slim body, and in two years in the second film about Bridget Jones she was plump again. Now 38-year-old Zellweger proudly displays her muscular shoulders and hips that are no longer feminine. It all happened thanks to her strict diet consisting of fish, rice and vegetables and two-hour daily workouts with her personal coach. Add swimming, yoga, jogging and a lot of walking and here is the formula of thinness from Renee Zellweger.

Contagious sport-addiction reached other countries as well. British actress Tara Palmer Tompkinson, the beloved of Robbie Williams, claims that she is ashamed of her great biceps she has acquired while working as a model. Still every time she goes out, she shows them by wearing low-cut dresses. She complained to The Daily Mail reporters that it was all because of peculiarities of her body. She can not put on weight in spite of unsparing workouts, no matter how hard she tries. Besides, constant exercises for arm muscles resulted in varicose veins that cannot be covered by subcutaneous fat.

Another famous British model, Nell McAndrew, who posed to photographers in all kinds of scanty clothes and even naked, faced the same problem. A decade ago she was considered one of world’s sexiest women, but after child-bearing she does not look womanlike. Nell did not put on weight during pregnancy, as it usually happens. Quite on the contrary: in an attempt to get back into shape the model got addicted to cycling, swimming and jogging. That resulted in thinness of the fat layer and premature skin aging.