Garlic has become more popular with scientists who used to be skeptical about medicinal herbs. They have confirmed the medical properties known to folk-medicine long ago and discovered the new ones. 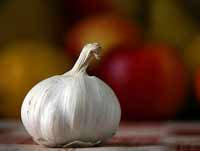 Scientists have confirmed the medical effect of garlic against flu and cardio-vascular diseases. To all appearances, garlic may help to cure a great number of other serious diseases. “Significance of Garlic and Its Constituents in Cancer and Cardiovascular Diseases” was the name of an International Research Symposium held a couple of years ago at Georgetown University.

“Garlic seems to really have an anticancer effect,” said Konstantin Spachov, a gastroenterologist, Candidate of Medical Sciences. “We have mostly studied its defensive effect against bowel cancer. According to scientists from the University of North Carolina, people eating garlic suffer this type of cancer 70 percent less frequently. Raw garlic appeared helpful after cooking as well. However, raw garlic is better. To enhance its medical properties you should do the following. You should crush or smash a clove of garlic and then wait for ten-fifteen minutes before you eat it. Oxygen activates the ferments and starts the synthesis of super active substances. The same things should be done before cooking. What is the daily dose? German scientists are very concerned with the problem. They believe it should be four grams of garlic at least (that is two cloves). It can be divided in small portions and added in different dishes to reduce the major side effect – the unpleasant smell. But if you treat yourself for flu, we recommend you to double the dose. When exhaling garlic odour, you help not only yourself, but the people around you as well. They risk less to catch your flu. Even if you do not want to eat garlic, put a saucer with smashed or finely cut garlic in your room for air disinfection,” the specialist said.

Should we take garlic as a dietary supplement?

“There is no unambiguous answer to it yet. I just recommend my patients to eat it. Some dietary supplements may have a lot of active substances, others – nothing to speak of. Western clinical studies give contradictory results as often as not. They consider the so-called dietary supplements with mature garlic extraction to be the most active. They age it like wine in particular conditions for 20 months, during that time persistent active substances accumulate there. These medications are devoid of garlic smell. Unfortunately, they have not appeared in Russia yet,” Konstantin Spachov says.

All people with cardiac diseases should eat garlic no matter if they take any medicines or not. Garlic combines well with other medications and helps reduce blood pressure and cholesterol level. The same concerns people suffering from diabetes, especially of type two, and would-be diabetics. Garlic lowers the sugar blood level and prevents the formation of the so-called end products of glycolysis. When the sugar level is high, they are formed in abundance, thus they damage the vessels and promote aging of the organism. Perhaps, that is the source of the garlic anti-aging effect, which scientists frequently discuss.

Scientists still do not know how to get rid of the garlic smell, though.

Garlic is a wonderful natural product that really helps during seasonal ailments. You do not have to eat loads of it; just spice your food moderately with it. If you are seriously ill, you should not treat yourself only with garlic, a consultation with a doctor would be strongly recommended. Another advantage of garlic is that it cannot be counterfeited unlike expensive medicaments.