The Rat to bring money and success in New Year 2008

The upcoming New Year, the Year of the Rat, is going to be a successful and ambitious time according to the Chinese calendar. The Rat is considered to be one of the hardest-working signs in the Chinese zodiac. 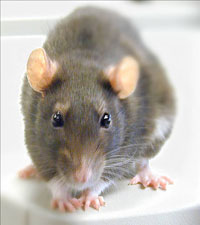 The Rat to bring money and success in New Year 2008

There used to be a tradition in ancient Russia to breed cockroaches in homes to emphasize the well-being and hospitality of its dwellers. Oriental nations bred rats for similar purposes. A Chinese proverb on poverty runs that rats can leave only poor homes. That is why the rat as a zodiac sign symbolizes success.

The rat became the symbol of the year owing to its artfulness, an old Buddhist legend says. When Buddha was handing out the years, the cunning Rat left the Ox, the Pig and the Dog behind.

“It reminds the situation with the presidential election that will happen during the Year of the Rat. So, we’ll see which Rat will take the lead and the office,” a famous Russian astrologer Anna Kiryanova said.

In spite of the fact that the rat is an omnivorous animal, the meals for the New Year should include grain crops, nuts and cheese. It is desirable to cook as much as possible. It would also be good to leave some food after the party and not to eat everything at once. “The more food is left, the better the year will be. It is important to stress out the abundance of food at this point,” says the astrologer.

Close people should celebrate the New Year together because the rat hails family ties. However, it is very easy to frighten the rat: it can not stand scandals and loud noise.

As for clothes, rat prefers luxury and precious metals. Astrologers recommend to wear the best clothes on New Year’s night.

The room where people are going to see the Year of the Rat in is supposed to be special. The room interior should be simple, exquisite and sophisticated. Astrologers also recommend to talk about perfectionism, something ideal and wise because the rat is an intellectual animal. Leo Tolstoy, George Bush, Carmen Electra, Eminem, Prince Charles, Scarlett Johansson and other famous people were born in the Year of the Rat.