Compact Disc celebrates 25th anniversary on the eve of decline

The Compact Disc, one of the most popular digital data formats, turned 25 years old on August 17, 2007. 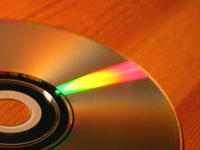 Compact Disc celebrates 25th anniversary on the eve of decline

The Compact Disc or CD was jointly developed by Holland’s Royal Philips Electronics NV and Sony Corporation of Japan. Compact Discs are made of a 1.2 mm polycarbonate plate covered with a thin layer of aluminum with plastic finish. At the beginning, CDs were meant for storing digital audio. In 1982, Philips researchers published the so-called “Red Book,” which contained the original CD standards. The CD format provided for two-track sound recording with 16-bit pulse-coded modulation and sampling frequency at 41.1 kHz.

Standard CDs measure 12 cm in diameter. The first CDs were designed for storing 650 Mb of data or 74 minutes of audio recording. There are a number of legends about how the size of the CD was chosen. According to one theory, a Sony executive wanted it to be long enough for storing Beethoven’s 9th Symphony, which is 74 minutes long. The symphony was arguably the most popular piece of classical music in Japan in late 1970s. Other people claim the size of the original CD matched that of a Dutch beer coaster.

The mass production of CDs kicked off on August 17, 1982, near Hanover, Germany. Those first CDs contained Richard Strauss’ Alpine Symphony. The product hit the markets as 1982 was drawing to a close. Nowadays CDs are also widely used for storing computer software and other data. Most present-day CDs are capable of storing 700 Mb of data or 80 minutes of audio recording.

The CD was a big success. It did not take long for CDs to outsell records and tapes in the late 1980s. CD sales reached a peak in 2001 when more than 710 million were sold in the U.S. market alone. But the sales have been recently in decline, in part due to increasingly popular online song-sharing technologies. The emergence of other digital data formats e.g. DVDs is yet another reason behind the downward trend in CD sales. The CD is unlikely to disappear overnight, but the end of its era may be drawing near.