Scientists say there is a place for God in the Universe

Only five per cent of the Universe is a usual visible matter, all the rest is mysterious dark substances 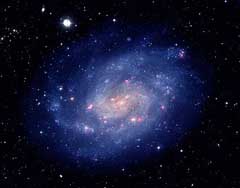 The international Vigro consortium of German, British, Canadian and US scientists handled the data collected from world observatories and created the most thorough computer model of the Universe using the largest European supercomputer of the Max Planck Institute. The supercomputer was turned off from other tasks that could distract it. 20 million galaxies were reproduced. Tracks of 10 billion particles of mysterious dark matter were traced. All in all 500 trillion mathematical operations were performed. The main result is that only five per cent of the Universe is a usual visible matter, all the rest is mysterious dark substances.

The most famous question by Einstein comes down to if the God had any choice when he was creating the Universe or all the universal rules and constants determined the events. Many ingenious minds have been either trying to solve the mystery of the Creator's plan or leaving no place for God in the Universe at all. Astronomy is the science that split scientists and theologians most of all.

The funniest thing about it is that today astronomy brings science and religion closer together. One of the most popular scientific theories about the origin of the Universe says that the Universe originated from the infinitely burning point of the infinitely small size and infinitely large density. This is the Big Bang theory that presupposes that there were no time and no matter until this moment.

Both astronomers-believers and complete atheists accept the Big Bang. The theory was formulated by Belgian priest and astronomer Georges Lemaоtre. The Big Bang is a detailed reproduction of the world's creation as it is described in the Bible. Not so long ago a Jesuit priest and the main Vatican astronomer George Coyne was defending the evolution of the Universe theory. He was urging school authorities to stop teaching such theories where God is described as a projector and constructor of the Universe.

The supercomputer can be given a new task – to check the scandalous theory of British astronomer sir Martin Rees, according to which the chance of modern civilization to live to see the next century is only 50 per cent. The reason for this is those mysterious dark substances that make up 95 per cent of the Universe and cause the never-ending recession of galaxies. Another road to stability is to revise the Einstein's theory and to add extra dimensions into space, those being inhabited by God knows whom.

The head of the Sternberg Astronomical Institute and the corresponding member of the Russian Academy of Sciences, Anatoly Cherepaschuk says: “Only three-five per cent of the Universe consists of common matter of baryons (protons, neutrons, electrons and light quanta). 70 per cent of the Universe is a matter with positive energy density and negative pressure. This matter is called the dark energy. Other 25 per cent of the Universe is particles of unknown nature. They have not been discovered yet but it is clear that they are heavier than protons and do not reach the speed of light. There are lots of baryons on Earth. We can get energy out of them. Scattered energy of the Universe's vacuum that is incommensurably larger remains beyond our reach. Where is the place for God here? Physicist may view the scalar field as God. It has not been discovered yet but its existence results from the theory”.

The chief researcher of the Landau Institute for Theoretical Physics and the corresponding member of the Russian Academy of Sciences commented on those mysterious substances: “25 per cent of the Universe is the dark matter, through which electromagnetic waves move freely without interaction. The least comprehensible is the dark energy, which is 70 per cent of the Universe’s mass. The dark energy is mysterious: it does not have particles and is distributed evenly in space. It is not clear whether its density changes. The density of the common matter became eight times smaller because the Universe extended twice. Why doesn't the density of the dark energy drop? Or is it that we are just not able to measure it yet? Complete darkness”.

One of the most promising models for explaining the dark matter is the so-called supersymmetric particles, that can originate from the collision of fermions (that include protons, neutrons, electrons) and bosons that follow Bose-Einstein statistics. “Supersymmetric particles are searched for with the help of the newest accelerators. The Great hadronic collider that is being created in Switzerland with Russian financial and scientific participation has a fair chance of success”, says Mikhail Danilov, the deputy head of the Institute for Theoretical and Experimental Physics and the corresponding member of the Russian Academy of Sciences.  “Another way of looking for these particles is cosmic rays. Russian scientists have developed a new type of detector for a joint Russian-English experiment. The main problem is to distinguish background radiation from the dark matter energy. I hope that the mystery of the dark matter will be solved in eight or ten years. A long time? Well, the neutrino particle was discovered only 30 years after Pauli had predicted it”.

Scientists who were believers: