Another human civilization may live inside Earth's hollows

Since ancient times the exploration of the North was of immense interest to humans. It was an attraction for adventurers and researchers seeking mysterious land and unexplored islands there. 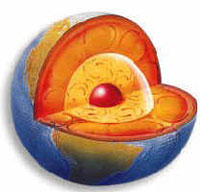 Another human civilization may live inside Earth's hollows

Legends say that an entry to the underground realms was located somewhere in the North, and legendary ancient tribes living on the planet centuries ago used the entries to have a good shelter under the Earth's surface. Mystics believe that the entry to the legendary Hyperborea, Shambala and Plutonia is carefully concealed from outsiders somewhere close to the North Pole. Recently, a reliable edition reported that UFOs coming to this planet start not from space but burst out from huge holes under the surface in the North Pole.

It was during Plato’s epoch that people first surmised that life probably existed inside planet Earth too. Plato believed that the planet inside was full of tunnels and cavities. Researcher Edmond Halley studied the magnetic field of the Earth and noticed that it slightly varied which suggested that there could be several magnetic fields at once. The researcher supposed that another sphere with its individual magnetic field was inside of the planet. The idea of a hollow planet was very popular among science fiction writers for a long period. And even some researchers presented various estimations and experiments to prove that the planet could be actually hollow inside.

One should know that the idea of hollows inside Earth appared dates from great antiquity. Seventy five years ago, the map of the North showed that a third of its territory was still unexplored, and it means that God knows what ideas about the mysterious North could exist at that time.

Doctor of geological and mineralogical science, Academician of the Russian Academy of Natural Sciences Mark Sadikov is sure that in the North there are no holes that can be used as entries to underground areas. The territory of the North is a deep-sea zone of the Arctic Ocean with its ridges and deep basins between them.

Research officer from the geography of polar countries department at the Arctic and Antarctic Research Institute Maria Gavrilo says she noticed no holes in the area of the North Pole when she was there. The expert adds that the North Pole is an ocean covered with ice, and this is an absolutely proven fact. Many attempts were made to find land there but all in vain. Now in the 21st century many new methods have been applied to carefully study the region.

Experts of the hollow Earth theory are certain that the planet has several magnetic fields. They also say that aurora polaris is gas that oozes out through the thin earth crust on the poles of the planet. What is more, followers of the idea emphasize that compasses get absolutely mad when approaching the poles. Many researchers also add that warm winds often blow from the north which provesthatlarge hollows may exist there.

Academician Mark Sadikov states that there are actually several magnetic fields. Some magnetic fields even belong to old platforms. As for winds, the temperature may vary depending upon local weather conditions.

There are two magnetic fields, the South Pole and the North Pole, Maria Gavrilo says. Both poles may shift widely. The extensive studies of both poles have revealed that each of the two is not steady and may actively migrate. The expert adds that aurora polaris is a unique phenomenon that is produced by the glow of excited atoms in the upper layers of the atmosphere, then it gets concentrated in an oval zone some distance from the poles where we can observe it. Astronauts saw from outer space that the entire of the Earth is wrapped in glow like in a halo, but earth dwellers can see it just on the poles. Aurora polaris is very strong; it may have a great impact upon human psyche and cause radio frequency interference.

Researchers say that it is normal that a compass may go mad when close to the poles. Indeed, the Earth’s magnetic field is the tensest inside of the pole, and chaotic movements of a compass are an attempt to point there.

Majority of suppositions concerning the idea of a hollow planet are based upon conjectures not scientific data. That is why serious contemporary researchers would not comment upon such theories. The North has been studied in detail. Scientific expeditions start for the North every month. What is more, foreign tourists go for trips to the North on ice-breakers very often.

According to researchers, hollows that may actually exist under the surface are just karst caves. At the same time, adepts of the hollow planet theory insist that the Earth would have had bigger weight if it were not hollow. But Maria Gavrilo responds that adepts of the idea should mind that when making calculations as concerning the weight of the planet one need to know that mass inside of the planet is not motionless but mobile. If the fact is ignored researchers may get a wrong result.

Life inside Earth is impossible first of all because there is no enough space under the surface. Second, pressure and temperature speedily go up at certain depths. When a mine deeper than one kilometer was built in Africa it turned out that people could go down the mine and stay inside with refrigerating plants only as the temperature was too high there.

So, the theory of the hollow planet was very popular when science was not that advanced as it is now. Mysteries on the surface are not enough for people, and they are constantly looking for new ones inside the Earth. Deeper layers of the lithosphere are the absolute mystery to us, and nobody knows what is located even deeper. There may be lots of unexpected secrets that people dream to uncover.