Do not offend water: it remembers every word you say 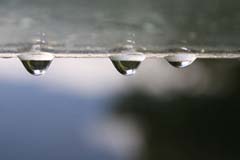 There seemed nothing to be as simple and as well studied in the world of science as water…until recently. The proverbial chemical description, temperature metamorphoses from ice into steam, solvent properties – that is about all. Deeper studies into the Nanoworld are ready to shake faith even in the water's simplicity. Just for one fact that it turns out water has memory and understands human emotions and words.

According to physics that we study at school water does not form any long-lived structures (if there is no other substance taking part in the process). Of course, there is so called hydrogen bond, due to which molecules are joined in chains, but such formations exist a tiny moment of time. Theoretically it means that water is hard to structure: at least all the stories about magnetized water or water that “remembers” substance once dissolved in it have been labeled as asientific for a long time. Nevertheless, it has been several years already since quite serious-minded scientists with the help of ultraprecision instruments began to study the ability of water to form those long-lived structures.

Russian scientists are among the leaders. In 2003 at the Institute of Biomedical Problems of the Russian Academy of Sciences Russian scientist Stanislav Zenin upheld a thesis on water's memory. The thesis' author owns a laboratory and studied clathrates, stable compounds (that can live up to several hours!) consisting of 912 water molecules of half-micron or micron in size. You can even see them through the phase-contrast microscope. Clathrates are almost electrically neutral in distilled water. However, Zenin found out that their electroconductivity could be changed. Bonds between the clathrates' elements can be broken with the magnetic stirrer and then water becomes dead and unordered mixture. If a tiny amount (even one molecule) of any other substance is added into water clathrates start “adopting” its electromagnetic properties. In the end Zenin engaged psychics and healers – people who do not enjoy respect in the world of science - in his work on thesis. He found out that some representatives of this dubious occupation can change water's electroconductivity drastically with the power of their thought. Zenin defined water as substance in phase-informative state with a structure suitable for data storage. He called it a biological information tank. He distinguished water's primary and long-term memory. Primary memory becomes apparent after a single impact. It is a reversible change in water's structure and a reflection of the new electromagnetic picture on clathrates' surface. As for the long-termmemory,it is a complete transformation of the matrix clathrates' structural elements as a result of long information influence. This means that you do not have to be a psychic to form a certain structure of water. It is enough to pass a certain emotion to water for some period of time.

The same conclusion was made by Japanese scientist Masaru Emoto. He discovered that water can really form ordered structures that turned out to be crystals. Each of them is unique and reflects the electromagnetic properties of water. Microcrystals are studied with the help of photographs. First of all, water drops placed into Petri dishes are quenched for two hours. Then they are placed into special apparatus that is a sort of refrigerator combined with microscope and camera. Here the newly-formed crystals are examined at temperature of 5C below zero. The most characteristic ones are photographed.

Dr. Emoto and his team study water from different sources of the world and also water that was effected by music, image, television, thoughts of a single person and a group of people, prayers, words typed or pronounced in different languages etc. Emoto discovered that there was a significant difference between crystals that listened to Beethoven and heavy-metal. Words “angel” and “devil” form structures that are similar and completely opposite at the same time.

Of course, Dr. Emoto can be also called a person with vivid imagination who uses equipment for purposes that have nothing to do with science. The Japanese scientist thinks that everything in this world possesses common vibration frequency, resonance wave (hado) that is able to transfer human emotions onto all surrounding objects. That is why one has to thank food that he/she eats, avoid negative emotions and pray more often. Such conclusions make scientific community laugh. But that is not always the case. Many researchers show interest in the findings of Dr. Emoto. Some are looking for the ways to transform processes that occur in water under the influence of electromagnetic radiation of the human brain into signals that are comprehensible for computer. In other words, they want to invent a computer that would be operated by thoughts. Others want to teach water storing the binary code. There are also those who try to find out if it is possible to change physical and chemical properties of water for special purposes (for instance, making it viscous in order to cool nuclear reactors with less energy consumption).

Such tendencies can one day result in the situation when theoretical science will no longer have doubts about water's memory while high tech specialists will be making “water” computers controlled by telepathy.