Dogs try to talk to people

It is possible that dogs have rational mode of behavior besides instincts and reflexes. They are able to express their emotions by posture, gestures and “facial expression” 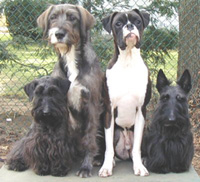 According to the Chinese calendar 2006 is the Year of the Dog. It seems that we know everything about this animal: dogs are loyal, clever, kind but can be aggressive and dangerous…There must be no mystery about the dog that is still left unsolved. But is it really so? Famous biophysicist, PhD in biology, one of the leading scientists of the Russian Academy of Sciences and member of New York Academy of Sciences, Aleksander Dubrov thinks that there is a room for argument here.

Q: Does it only seem to people that they easily understand dogs?

A: It is the "speech" of the dogs and other animals I'd like to talk about. Animals communicate with each other through different signals and codes that express anxiety, fury, love etc. These natural signals are not considered logical speech or means of communication. However, animals just as humans “speak” in a different way. Consider, for instance, the monotonous woof of some lap dog and the rich intonations of terrier’s growling. I am not aiming at offending the lap dogs, though. Some of them are truly talented vocally.

Apart from the “speech” dogs use other means of communication like posture, gestures and “facial expression”, if I may put it so. Smells are important as well. There are also communication channels between animals that are not well studied. They are connected with the bioelectromagnetic fields and complex acoustic signals. When we think that the dog understands us and wants to say something good but is not able to do so, it is close to the truth.

A: Don't be hasty in making conclusions! British cynologists conducted several experiments with two groups of dogs that were placed in the same conditions. The first group was cared by people very well, while the second one was almost deprived of people's attention.The dogs were fed and walked in the same way. However, people talked and expressed their emotions only to the first group. Dogs in this group remain themselves while the ones in the second group started producing strange sounds. Scientists came to the conclusion that dogs try to imitate human speech, transmitting information about their needs and state. When the researchers started paying more attention to the second group dogs soon turned back to their usual bow-wow.

Moscow Pinscher Stepan greeted his master so accurately that the master's relatives would often mistake his voice with the woof of the dog. Once Stepan even produced a phrase that was never used in the house before: “It's time to eat!” Soon he started using it every time he felt hungry.

Scientists that are studying this phenomenon began to question whether it was just a mechanical imitation. If yes, than where do the independently and logically constructed phrases come from? If it is just a coincidence why does it happen so often?

At the beginning of the 20th century in Germany there was a dog called Ralph that could read: tipping with its paws – that was a sort of Morse code – the dog could construct whole sentences that were not so simple, I must say. In 1915 a book of Ralph's recollections and letters was published in Mannheim.

A: The thing is that it was true. Scientists still cannot agree on mechanism and psychological basis of the animals' speech. Some think that the social labor developed abstract thinking of people that is not common for animals. Thus animals can possess only some elements of this quality.

Other researchers believe that many animals are able to think abstractedly, generalize and evaluate. The problem is that we know so little about them while they are trying to explain what they need.

Famous Russian animal psychologist L. Krushinskiy thinks, “The highest form of neural activity that is considered rational can be diverse”. The corresponding member of the Russian Academy of Sciences V. Troitskiy agrees. He assumes that there are different levels of one and the same intellect on the planet.

Q: Why have the dogs started talking only recently?

A: Why, indeed? They were communicating with each other without words for thousands of years. Anyway, 200 or 300 years ago there were no cases like this. I think that the reason is the following.

In the earliest days of the civilization people were trying to understand animals and imitated the sounds they produced. There are numerous legends proving this fact. Thus, for instance, the biblical King Solomon was could understand the language of animals and birds. However, the situation has changed with the development of science and technology. And it looks like these changes are not for the better for animals. Probably feeling the danger they resolved to a desperate attempt to talk to us in a human way. They are trying to explain that they also feel joy and pain and they want to live…