Latest geophysical discovery to overturn all concepts of Earth's history

Earth may have been formed in the wink of an eye, new study says

Our planet assumed the present form 4.5 billion years ago. It has not virtually changed the original appearance ever since. Earth was suitable for conceiving and developing life forms from the first moments of existence. A team of Western researchers reject the theories about Earth being completely covered with oceans before the first marine species stepped onto the shore. 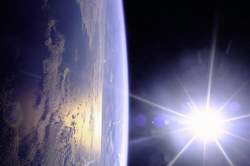 In short, the story of the discovery looks like this. A rare-earth metal hafnium combined with the crystals of zirconium was found in Jack Hills, a massif in Western Australia. The rocks of the mountain range are considered the oldest in the world (estimated age is 4.4 billion years). Researchers used a radioisotope analysis to find out that the continental crust had formed 4.4-4.5 billion years ago. The continental crust differs from the ocean one by its makeup and thickness. It was previously thought that the continental crust had gradually melted out of the ocean crust.

“Looks like Earth formed in the wink of an eye,” says one of the researchers, Dr. Steven Moses at the University of Colorado. “If the theory proves to be right, all today's concepts concerning the formation of Earth will have to be completely revised. Perhaps researchers will have to study the civilizations of Atlanteans and other ancestors whose stories had been regarding as pure fiction before. Assuming that a protein life form existed on Earth several billion years ago, the possibility of those of civilizations looks no longer utopian,” says the researcher.

A team of researchers led by Dr. Moses conducted a study regarding the formation of water. The study shows that water appeared on the earth's surface about 4.3 billion years ago. The findings contradict the previous theory saying that water condensed from the atmosphere 3.8 billion years ago. According to researcher, the new findings indicate that the earth's crust, its oceans and atmosphere existed from the very beginning, and the planet Earth was suitable for life in those prehistoric times.

“Dozens of various theories of the origins of Earth were put forth during the long history of science,” says Valery Rudukov, senior researcher of the Institute of Physics of Earth under the Russian Academy of Sciences. “Buffon's theory was quite popular at the beginning of the last century. According to theory, the Sun was a white-hot mass when it collided with a comet. The collision resulted in a big hot chunk of the Sun being torn away and split into several parts. The parts later formed planets that went on to circulate round the Sun due to centrifugal and centripetal forces. According to Buffon's theory, the planets might be the parts of incandescent solar matter and therefore might be originally incandescent. The gradual lowering of temperatures on Earth led to the inception and evolution of life. However, the same theory says that the temperatures will continue to drop. All organic life forms will be reduced and killed in the end by the cooling,” says Dr. Rudakov.

Many researchers argued against Buffon's theory. Different researchers have different ideas regarding the origins of life. The drifting continents theory and a few others were regarded the most correct in our time. But none of the theories could explain how things were taking shape billions of years ago. A bold hypothesis of the European researchers will probably shed light on many issues.