In another ten years a flight to the orbit now available to millionaires will be quite an ordinary thing. Instead, flights to the Moon will become more fashionable and exciting. Nowadays, Russia and the USA offer tempting routes to wealthy customers: a non-stop flight around the Moon and even landing on the Moon. While flights to the satellite offered by national companies cost about $100 million, private companies offer tours to the Moon that are four times cheaper. Commercial flights to the Moon are no longer the prerogative of Russia and the US only. The other day, two private American companies said they were ready to outdo the space tourism projects of the two countries. In other words, these companies are ready to start making money on the Moon ten years earlier than state-run companies. Which company offers cheaper tickets to the Moon today? 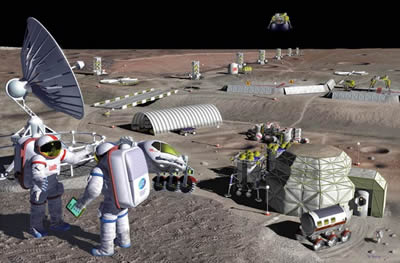 Russia has a goal to perform a tourist flight around the Moon in 2014. The project will supposedly cost about $15 billion. At first, space tourists will have to get to the International Space Station with the Soyuz modernized spaceship accompanied with one cosmonaut. At the ISS tourists will dock with another more powerful spaceship, Proton or ecologically safer Angara which will become the base of the moon spaceship and its boost block. Russian developers say the hybrid of Soyuz and Proton booster rockets will perform a flight around the Moon and take space tourists back to the surface. It may supposedly take from eight to ten days to blast off from Baikonur spaceport, make the flight and return to the Earth. An autonomous flight to the Moon will make up about six days. The tour will cost each tourist $100 million.

In the future, Russia's Roskosmos plans to set up a base for mining minerals, helium-3 for instance, on the Moon. Such a base may be built at the bottom of one of the lunar seas.

There are some defects in the project, however. What are space tourists to do if something happens to the only professional spaceman accompanying them? And also some experts think that mining minerals on the Moon is not quite feasible. They say it would require plowing half of the Moon to mine helium-3.

The US plans to take four astronauts to the Moon in 2018. The project will supposedly cost $104 billion. The American plan needs more time for realization but it is more extensive than that of Russia. American specialists plan to build an orbital station and a residential base on the Moon's surface. NASA is even more optimistic as concerning the life support system on the satellite. It plans to heat a residential outpost in the area of the South Pole with helium-3 mined on the Moon.

The USA plans to deliver construction materials needed for the project with a giantrocketas high as a 40-storied building. The rocket will be built on the basis of a shuttle external fuel tank. First, a crew module with astronauts will be delivered to the orbit. The rocket will hover above the Earth waiting for the second stage of the complex, Earth Departure Stage with the landing module. When it docks the crew module, the complex will head to the Moon.

The lunar mission is believed to precede another important event, a 500-day flight to Mars. According to the project, six astronauts are to start from the Moon in 2030.

The intention to fly to Mars from the Moon is a weak point of the American project together with the enthusiastic optimism as concerning mining fuel on the satellite. Even though George W. Bush confirmed the intention of the Martian mission, many people believe it is bluff.

USA's SpaceDev says it will be able to perform a tourist flight around the Moon or land a manned spacecraft on the Moon for scientific research in 5-8 years. The project may cost less than $10 billion. The private company also supposes to build a residential base in the area of the South Pole.

The private company obtained the project of its new lunar spaceship in a dustbin. The Dream Shaser six-seat orbital spaceship the company offers for flights very much resembles the HL-20 light shuttle that NASA developed in 1992 but failed to launch. The company will offer cheap tickets to the Moon by receiving at least four space tourists on board of the modernized spaceship HL-20. SpaceDev expects that landing on the Moon will be fairly inexpensive.

Another American company, Artemis Society International, plans to build a tourist base on the Moon in the nearest ten years. The company does not advertise how much it supposes to spend on the project. Director Ian Strock says it is high time for private companies to decide if they join the space commerce and in what way exactly they may participate.

The concern is a sponsor of the project for building a manned base on the Moon. Officials of Artemis Society International say there are no technical barriers for realization of the project. Money is the only problem for building a base on the Moon as it is a very expensive project, of course. But Mr. Strock hopes all the spending on construction will be repaid soon when the base begins to receive space tourists. First tourists will have little convenience on the Moon but they will be real pioneers walking where no other people stepped before.

A ticket to the Moon offered by this company will supposedly cost $25 million for each tourist. The only fault of private projects is that they employ technologies which can be not as safe and reliable as those used by national companies.