Fishermen at the northern part of Honshu had to suspend fishing due to invasion of jellyfish. The creatures have become a real problem recently. The giant jellyfish become regular visitors to the fishing nets. 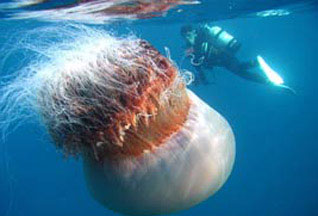 The giant jellyfish is normally found faraway from the shoreline of Japan. These days they seem to be moving closer to the shore. Some species can weigh up to 200 kilograms. The big medusas are reported to cause damage to the nets and poison the fish.

It is still a mystery why the giant jellyfish invade the coastal waters of Japan. Some blame the global warming and changes in ocean currents, others point to a high level of precipitation in China, which resulted in the jellyfish being shifted from China's shore to the coasts of Japan.

In any case, the jellyfish is a real problem that needs tackling. Representatives of Japan, China, and South Korea will soon be discussing the problem at a special conference.