Real cat-fanciers know almost everything about cats. But still cats protect their mysterious and unusual world from interference of other living beings. This is a certain type of the extrasensory world which  animals use to pursue their own ends. 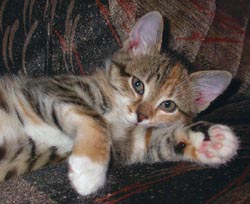 A human abode is a large cage where cats live together with humans but still remain wild animals being on friendly terms with their masters, scientist Konrad Lorenz says. This wildness allows cats retain their unusual talent to perceive the world the way their untamed congeners do. Cats see the surface covered with an energy net made by geomagnetic fields emanating from the ground. These fields resemble carpets with intricate decorations. Some extrasensory people say this is a well-ordered net looking like honeycombs. Others state the Earth's surface is lined into squares; it is not ruled out there are also parallel lines sometimes crossing neighboring sectors. Zoologists believe that frogs, lizards, dolphins and certainly cats are capable of orienting themselves with the help of the net.

Formerly, people usually were skeptical as concerning newspaper reports saying that cats managed to get back home even after they were taken hundreds of kilometers away from home. Cat named as Sugar from California jumped out of its owner's car during a trip and got lost. The cat got back home a year after it covered the distance of some 2,400 kilometers. Black cat Suti had to leave the home together with her female owner. The cat did not like the woman's new place of residence and decided to go back to the previous home. The cat by miracle managed to get there in five months after it walked over 150 kilometers.

Scientists have made great progress recently to unveil the mystery of the cat world. The visual memory of cats is excellent but they employ it only to find a way home at short distances, in the area where they live.

When cats cannot employ their visual memory they may be guided with the geomagnetic pattern on the Earth's surface. It is interesting that cats do not need to look at the road and keep the route in memory when they are taken away from home. A cat may easily remember the route even if it is put into a bag when moved to a remote place. At that, its way back home will be absolutely the same which it traveled away from home. How do cats feel the pattern of the earth's electromagnetic and magnetic fields?

Researchers discovered tiny magnetic particles of metal on the “wrists” of cats' fore and hind paws. These particles can be seen through a scanning electronic microscope only. Researchers from the Natural History Museum in Stockholm also discovered magnetic “bracelets” onlegs ofcats and other animalsthat are capable of finding a way back home rather easily (dogs for instance). It is astonishing that even humans may have some magnetic sensory organs: microscopic magnets form bracelets in bones.

The ability of cats to sense danger is particularly amazing! This talent of the cute fluffy pet is known worldwide although it has not been explained yet. Cats may often save people from death.

Li Shuhua from China's Fulin woke up at 4 a.m. because of wild cat cries. The man's domestic cat was rushing from the front door to windows, scratching window-frames and doors. Soon, other members of the family woke up because of the terrible screams. The cat suddenly jumped to the owner's grandson and began scratching the boy. Then, the animal attacked the master's wife and made the frightened woman retreat to the front door. At that very moment the man noticed big cracks on the ceiling and walls. The two-storey building tumbled down just several seconds after the cat and the family abandoned it.

How do cats sense danger? Cats perceive the tension arising in various constructions the way people may see a piece of fabric first stretch and grow thin before it is finally torn. It is a sure fact that cats may have a presentiment of coming earthquakes and other calamities. Many cat owners noticed that their pets become disheveled and anxious  for no reason when they feel an earthquake approaching. Not only cats but also other domestic animals – dogs, horses and goats for example – may predict coming earthquakes with their behavior. People should carefully watch the conduct of domestic pets to avoid many troubles. Cats may sense earthquakes by the geomagnetic net covering the earth surface. This net grows thinner because of the earth's crust strain before earthquakes. In such cases cats will invariably carry their kittens to a safer place.

It is not ruled out that changes in the magnetic fields entail changes of the static electricity charge. Many nations believe that cats must be the first to enter newly-built lodging to see if it is safe for living. Indeed, cats may “see” the geomagnetic pattern of the floors and also sense the strain fields on the walls and the ceiling. Many experts state that a cat never does harm to itself and will sleep only in a safe place. So, this domestic pet may help people see which corners of their houses are safe and which are unfavorable.

Some researchers make sensational statements saying that cats may predict not only earthquakes but also convulsions of nature, storms, even fires and bombing. The cats' ability to sense imminent danger during WWII was so important that British authorities even instituted a special medal to award cats that helped save people's lives.