Bringing the planet's temperatures down by reducing the amount of sun rays falling on it may help avoid global warming. This hypothesis was voiced by director of the Global Climate and Ecology Institute at Rosgidromet and the Russian Academy of Science, Yury Israel. 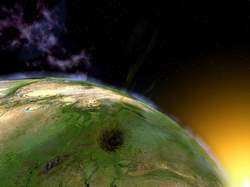 “To control the climate this way, some aerosol substances must be put into the lower stratosphere to absorb a part of sunlight. This in its turn will reduce the influence the Sun exerts upon the Earth's surface,” the researcher said at a press-conference.

The researcher predicts that the temperature on the planet will go 1-5 degrees up in the coming one hundred years. The temperature rise will entail drought, cyclones, floods and other ecological disasters. He adds that for this purpose about 600,000 tons of aerosol particles must be pumped into the stratosphere to bring the temperature of the Earth's atmosphere 1-2 degrees down. This amount of aerosol particles can be obtained by burning 100-200,000 tons of sulfur.

Yury Israel says sulfur may be delivered to the stratosphere and burnt there. He also suggests using high-sulfur fuel in high-altitude planes. Both methods may reduce the temperature in the troposphere. These artificial formations usually drift in the stratosphere and form wide zones within the latitude of 30 to 70 degrees.  These zones may protect the planet from solar radiation, the researcher believes.

Academician Isreal states that sulfur is not dangerous for human health. He explains that special calculations reveal solar radiation will reduce by less than one percent near the planet's surface while using the method. At that, the amount of aerosol precipitating on the Earth's surface will make up 0.2 mg per square meter a year, which is one thousand times less than the amount of sulfur falling on the planet together with atmospheric precipitation.

Yury Israel is sure that this method of global warming prevention that had been developed by Academician Mikhail Budyko earlier “is safe for people's health. It is cheaper and more effective than the measures provided by the Kyoto Protocol. According to the Protocol, developed countries of the world must reduce greenhouse gas emissions at their own free will.