The poor will live at cheap bottom levels suffering from sunshine shortage. The rich may feel ill at ease due to their life in midair

An urban future in a sci-fi movie looks pretty much the same: blocks of incredibly tall high-risers with a bunch of winged machines zooming around. Judging by numerous modern projects, the majority of people are quite happy about the way a typical future would look like. The number of city dwellers is growing year in and year out. Architects still rely on a skyscraper as the most basic solution for the enlargement of urban areas. However, there is yet another concept on hand.

Reach for the sky

The architects Xavier Pios and Maria Rosa Servera, a husband and a wife, had been looking for a suitable country to implement their project called "Virtual Bionic Tower City" - an urban development project to house 100,000 people. Finally, China expressed its interest in the unusual undertaking. 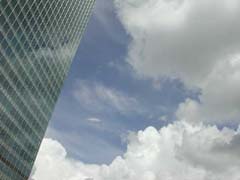 The designers believe that a 300-storey building can be completed in some 15 years. The skyscraper will be erected in the center of an artificial island designed to absorb the underground vibrations. The tower will contain 12 vertical blocks; each block is supposed to have a lake surrounded by a garden.

Aside from being an apartment complex, it also has a number of stores, kindergartens, beauty parlors, entertainment facilities, parks, ponds, and other facilities for the daily use of the city residents.

Similar futuristic skyscrapers have been designed by a Japanese company Takenaka Corporation. Sky City 1000 is a thousand meters high, Holonic Tower is six hundred meters in height. The towers would be built for living, work, and leisure. There are detailed safety and maintenance instructions; rescue operations are in the book for any kind of emergency situations.

The Chinese and Japanese tend to pass over the majority of psychological aspects of living in tower cities because the issues relating to overpopulation are sensitive to the both countries. Meanwhile, the human being is an earthling which is more used to horizontal movements. Some residents of the modern skyscrapers already feel a particular discomfort due to day-by-day life “high above the ground.” Engineers, artists and architects from various parts of the globe joined forces for the development of a city of the future. They set up a foundation called Dynamic City.

Dynamic City is based in Beijing. Its goal is to try and come up with designs to alleviate the problems relating to his heavily populated city. Specialists build the mock-ups of a future Beijing comprising seven huge towers connected with bridges at the different levels.

The model implies stratification of all residents into the usualthreesocial groups. The poor will belong to the bottom levels, the middle class will occupy the middle part, and the rich will live up in the clouds.

However, residents of the cheap bottom levels will definitely feel the lack of plain sunshine while the rich might feel ill at ease due to their life in midair. Living in a super tall skyscraper can be pleasant. But there are some inconveniences as well. We should not forget that a psychological impact of a high-altitude life on the human being remains to be seen.

The point is that the architects themselves are not so happy about their own concept of the future city. The mock-up of the city would perfectly meet the market requirements, the city would be a great place for the producers and consumers. However, it would hardly satisfy the harmonious and free.

City in the computer

The Koreans, who seem to be less concerned about the overpopulation, have come up with their own concept of a city of the future. New Songdo, a city/computer, is hopefully going to be built on a sea shore 65 km away from the capital Seoul by the year 2015. Total area of the city will be 5.5 thousand square kilometers; half a million people will live and work in it. The Koreans hope to create one of Asia's largest economic centers, a capital of high technologies, a real “smart city” akin to the “smart house” with fully computerized functions.

There will be a common database facility for all buildings of a city. City dwellers will be able to do lots of things using one SMART card only e.g. pay utility and shopping bills, vote in a local election, lock and unlock their houses, even start up their vehicles.

Needless to say, New Songdo, is designed to become a free economic zone with tax incentives for the business development. Investors intend to put $25 billion in the project. They believe that the money will pay back.

The work of the architects who opt for alternative minimalist concepts is rather inconspicuous. A Canadian architect Tom Chadley called his project The free spirit spheres. He devised one-family round houses to be attached to the trees at 2-3 meters above the ground. So far the architect designed two versions: a pine tree sphere Eve that measures 2.7 meters in diameter, and a three-meter fir tree sphere Eryn. The first version has two windows, a dresser, and a double bed. The second model has more space inside, five windows and the so-called attic bed that can hold four persons. Tom is planning to improve the interior and equip the sphere with all necessary conveniences. He is also going to build a number of such houses in the forest and sell them.