Russian scientists design an aerospace passenger plane, capable of flying at the speed of 30,000 km/h

Traveling around the world in 80 days seemed incredible in days of old. Traveling around the world in 80 minutes seems incredible today. Only cosmonauts can travel so fast. But things are changing. Specialists at the Moscow Institute developed a model of aircraft that is capably of carrying passengers and cargo to any location of the planet at a speed undreamed-of by modern aviators. 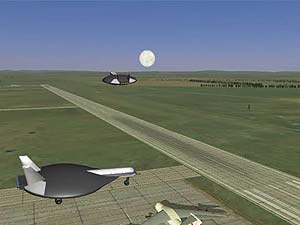 “The aircraft designed by the institute falls under the class of aerospaceplanes,” says the director of the above institute. “It will use a usual runway for taking off and landing, like a usual airplane. But it will fly like a manned spacecraft when in midair,” adds he.

State-of-the-art engineering and new high-melting and high-module materials, new kinds of fuel and new design concepts are expected to be used for the building of the spaceplane. Hypersonic engines will be used for boosting the ship to such a speed. The engines are powered by oxygen and hydrogen and therefore environment-friendly.

The design space plane is 75 m long; its gross liftoff weight is about 800 tons (mostly due to fuel).The space plane will be capable of lifting from 10 tons to 45 tons of payload to 100 km or 200 km (anticipated movements altitude). The cost of cargo flights will be lower than that for the space shuttle missions. Carrying a kilo of payload by a space shuttle will cost a customer from $10 thousand to $20 thousand. The rates for the space place cargo flights will range from $100 to $200 per one kilo of payload.

The space plane will have rounded wings, the front part of a body will house either a crew or a payload. The engines will be mounted at the rear part. The space place will look like a flying saucer to some extent. Researcher have already built and tested a working prototype of the space place on a scale of 1:25. A lack of financing is the main stumbling block of today.

“The building of two active spaces plane will require from 6 to 8 billion rubles,” says the director of the institute. “It will take us from 5 to 8 years to build them provided that the financing starts in the nearest future,” adds he.