Humans try to grasp the mystery of animal regeneration

Scientists have long been trying to find out how the amphibians e.g. tritons and salamanders can regenerate their shed or torn tails and broken jaws. Moreover, some animals can also regenerate their damaged hearts, eye tissues and spinal cords. Scientists finally understood the way used by the amphibians for self-repairs. As it turned out, the cells of a future organism are immature at the early stage of development, and therefore subject to potential changes. 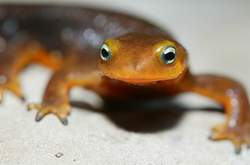 Experiments involving the frog embryos produced evidence to back the above conclusions. A piece of tissue of the future skin can be cut out of an embryo comprising just a few hundred cells. The piece is then inserted into the brain area. Eventually, the piece will be part of the brain. On the other hand, the skin cells will develop into the skin right in the center of the brain if a more mature embryo is used for the experiment. The destiny of the cells has been already decided.

The cells of amphibians can turn back time and return to the moment where their destiny could have been altered. Bone cells, skin cells, and blood cells of a damaged area (a salamander's paw has been turn off) in the body of a amphibian will become the cells lacking any distinguishing characteristics. All the mass of “newly born” cells will start dividing in an active manner. The cells will turn into the bone, blood, and skin cells as required. Finally, the cells will make a new paw.

What about regeneration capabilities of a human being? There are only two kinds of cells that can regenerate – blood cells and liver cells. The principles of regeneration are different in this case. A small number of cells are unaffected by the process of specialization as the embryo of an mammal grows on. These are the stem cells. The stem cells can replenish the blood stock or the amount of dying cells of the liver. Spinal cord too has the stem cells: they can develop into the muscle tissue, fat, bones or cartilages depending on nutrients provided to them.

Are there any chances for a human being to become capable of regenerating missing parts? Until recently scientists had known that mammals could not regenerate. All of a sudden, and by a mere chance – the way it often happens in the history of science – everything changed. One day Elen Heber-Katz, an immunologist from Philadelphia, told her technician to do a regular procedure. He was told to pierce laboratory mice's ears so that tags could be attached.

The strange event prompted Dr. Harber-Katz to put forth an incredible theory about the mice who simply regenerated the tissues and cartilages for filling the holes they did not need in any way. A closer examination reveled the presence of blastema in the damaged areas of the ears. Blastema is any zone of embryonic tissue that is still differentiating and growing into a particular organ like in the case of amphibians. But mice are the mammals that are not supposed to have such abilities.

Dr. Harber-Katz believes that living organisms had originally used both the immune system and regeneration for recovering from wounds. Yet the two methods proved to be incompatible during the evolution and regeneration was eventually deleted. On the face of it, regeneration seems a better choice. However, T-cells (cells of the immune system) are more efficient and vital for us humans. They are the main weapon to combat malignancies.

What is the point of growing a new arm while cancer cells are developing by leaps and bounds in the body? It seems that the immune system acts as a suppressant to our ability for self-repair while protecting us against infections and cancer.

Doros Platica, the head of Boston-based company Ontogeny, is confident that we will be able to start up the process of regeneration one of these days, even though some of its components will remain a mystery to us. Our cells keep an innate ability to grow new body parts, the way they did during the fetus development. Our every cell's DNA bears recorded instructions on the growing of new organs. We just need to make the cells “to switch on” their abilities, and the process will take care of itself.

Specialists at Ontogeny are working on medicines to activate regeneration. One medicine is already ready and will be probable approved for sales at retail in Europe, the United States, and Australia. The medicine is dubbed OP1, it is a growth factor that stimulates the growth of new bone tissue. The medicine will help to treat complicated fractures involving two parts of a broken bone, which can not knit together due to a huge gap between the two parts. OP1 can give a boost to the bone tissue growth so that the tissue will eventually fill the gap between the two parts in the course of growing.