Bigfoot documentary to celebrate its 40th anniversary in 2007

The most famous eyewitness of the gigantic ape-like creature held the US citizenship: it was President Theodore Roosevelt

The World Wide Fund for Nature has recently made a sensational announcement about the discovery of a previously unknown mammal. The cat-sized animal was found on Indonesia's Borneo Island. In spite of the fact that humans have explored the length and breadth of land, scientists still discover new species of mammals. A dwarf elephant, a mountainous lion, a dwarf rhinoceros, a giant panda, and many other animals have made brand-new entries on the zoological list of planet Earth. 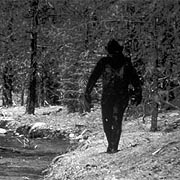 The biggest, most mysterious and controversial mammals of all, the Bigfoot, remains undiscovered, though. Countless scientific expeditions, crafty tricks and traps to catch the mysterious creature have brought no results. But people will continue searching.

The world-known documentary showing the Bigfoot walking in California will celebrate its 40th anniversary in 2007. Millions of people have seen this film worldwide. One may say that it is as popular and famous as Disney cartoons. Experts of all titles and ranks have analyzed every slightest detail of the footage. The USSR's KGB officers were extremely interested in the US-made film as well: they concluded the tape was not fabricated. US specialists used laser equipment, radar probes and robotic stations to analyze the controversial material and came to a similar conclusion. Specialists, including Russian scientists, believe that the film shows an unknown animal, not a human being. Unfortunately, it has not been possible to conduct a genetic analysis, which would clarify all points on the matter.

There is nothing surprising about the fact that it was the USA, which obtained the most famous Bigfoot. The most famous eyewitness of the gigantic ape-like creature held the US citizenship too. President Theodore Roosevelt saw a Bigfoot in the beginning of the 20th century.

Bigfoot has been spotted on Russia's territory too. The last expedition took place in August of the current year, when a group of Russian researchers went to Bashkiria Republic. As usual, the scientists found a great deal of footprints and witnesses who saw the creature, but they failed to catch the sight of the animal. There was a special committee at the Russian Academy of Sciences to study the Bigfoot phenomenon.

The expedition organized by Japanese scientist Yoshiteru Takahashi in the Himalayas ended with a sensation. The researchers saw Yeti walking at a large distance. They found 13 footprints of the animal, each of them measured 35 centimeters long and 20 centimeters wide. Takahashi said afterwards that he was certain of Yeti's existence.

Mountaineer Makoto Nebuka, who devoted 12 years of his life to the Bigfoot phenomenon, concluded that the legendary Yeti was a brown Himalayan bear. The word “Yeti,” the scientist said, was a twisted version of the word “meti,” which means “bear” in a local dialect. The bear is considered a supernatural creature in Tibet, that is why the myth about the Bigfoot was distributed so fast in the world, Nebuka believes.

Carl Linnaeus, one of the founding fathers of modern biology, believed that there was an intermediate species of troglodytes, or cave-dwellers, between modern humans and apes. Could Bigfoot could be that troglodyte, a lost link of the evolution?

Russian professor Boris Porshnev believes that Yeti descended from Neanderthal men that were ousted from Europe and then exterminated by organized Cro-Magnon men about 50,000 years ago. A remarkable discovery made headlines of all newspapers several years ago. Scientists discovered a frozen mummy of a human being that lived on the planet over 5,000 years ago. Following Porshnev's theory, it looks strange that that the relic human is taller than 160 cm Neanderthal men.