In August of 1986, Voyager Two, a U.S. interstellar probe launched in 1977, began sending to Earth the first close-ups of planet Neptune. Scientists at a laboratory of jet propulsion in Pasadena, California, found a lot of amazing data while studying the pictures. First, a color scheme of Neptune surprised the researchers. It was bright blue with a few spots of white clouds. Second, a wide inclination angle of the rotation axis of the planet, which indicated a strong magnetic field, ample resources of internal heat, and a liquid core. Given the data and pictures sent by Voyager from the vicinity of Uranus in 1986, and information on Jupiter and Saturn sent by the probe some time earlier, the latest achievements of the spacecraft enabled us to take a closer look at the solar system the way we never did before. 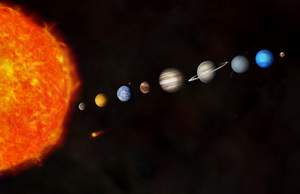 Were we the first ones who managed to observe most distant planets of our solar system?

Linguist and historian Zachariah Sychin believes that data from Voyager merely confirms his predictions first published in a book titled The Twelfth Planet. The book was published in 1976.

Sychin also believes that data obtained by the probe agree with the writings of the ancient Sumerians, the writings made 6,000 years ago. The civilization of the Sumerians emerged in Mesopotamia (now a part of Iraq) around 4000 B.C. According to Sychin, the Sumerians invented a wheel, a furnace for roasting earthenware, and an irrigation system. More importantly, they invented the basic concepts of astrology. They used cuneiform writing for putting down their discoveries on clay tablets, statuettes and stone cylinders with mirror engravings of the symbols and drawings. Positive images were produced by rolling the cylinders over the soft clay.

Sychin had been studying articles of the Sumerian civilization for more than 30 years. One day he found a rare stone cylinder in a museum of West Berlin. Apart from the image of a god giving a plow to humankind, the cylinder also had a startling chart of the heavens showing the planets with the Sun in the center. In total, the chart contained 12 planets, the Sun and Moon inclusive.

The researcher was astounded when he saw the image of Uranus transmitted by Voyager Two in the January of 1986. The Sumerian description of the planet – mash.sig – meaning “bright greenish”- almost matched the greenish blue picture of Uranus on his TV screen. Sychin's translation of the Sumerian expression “hum.ba” read: “marsh plants.” He believes it indicates the presence of hot semi-liquid material that was discovered on Neptune three years later. The Sumerian regarded Uranus as Neptune's twin brother. Data gathered by the probe seemed to confirm the point. Not unlike Uranus, Neptune's color is bright blue, the planet has a strong magnetic field, a hot semi-liquid core and plenty of water.

The question is: how could the Sumerians know about the above things in days of old when there were neither telescopes nor satellites? Sychin claims he can answer the question. According to him, the Sumerians received secret tips from the aliens who the planet Nibiru, the twelfth planet sitting between Jupiter and Mars on that Berlin cylinder. The aliens allegedly visited Earth repeatedly every 3000 years. “It is all in the texts including the myth about Anki and Earth,” says Sychin. Andy Cheng, a researcher from the Voyager Two mission liaison team, admits that many similarities between the two planets do exist, the planets might as well be called “the twins.” As regards the all the other statements by Sychin, they “just astonish me,” as Mr. Cheng put it. “Finding water on Uranus and Neptune was not a mind-blowing experience. And all the planets but Mars and Venus have liquid cores. We also expected to find a magnetic field. The color of the planets ceased to be a mystery years ago,” said Mr. Cheng. Moreover, he believes that a planet X would be devoid of any life forms if it really existed in the solar system because of it would be located too faraway from the Sun.

Mr. Cheng believes that the cylinder probably contained only the stylized images of random stars which by no means should be interpreted as a precise chart of the heavens. Francesca Roshberg-Halton, a leading expert in Sumerology at the University of Notre Dame, used a stronger word for her comment: “rubbish.” “The cuneiform characters can be interpreted in a most outrageous way. In particular, some inexperienced deciphers can mess things up. There is no such thing as the Sumerian astrology,” said Dr. Roshberg-Halton. She also believed that Sychin made several blunders. “The Sumerians were aware of only seven planets including the Sun and the Moon. Therefore, the twelve planets are out of the question. The radiant star in the center of the picture is not the Sun, it is Venus,” said she.