Progeria is an extremely rare genetic disease of childhood characterized by dramatic, premature aging. The condition, which derives its name from "geras," the Greek word for old age, is estimated to affect one in 8 million newborns worldwide. 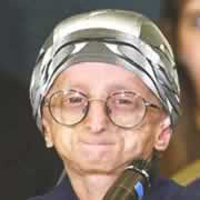 The most severe form of the disease is Hutchinson-Gilford progeria syndrome, recognizing the efforts of Dr. Jonathan Hutchinson, who first described the disease in 1886, and Dr. Hastings Gilford who did the same in 1904.

As newborns, children with progeria usually appear normal. However, within a year, their growth rate slows and they soon are much shorter and weigh much less than others their age. While possessing normal intelligence, affected children develop a distinctive appearance characterized by baldness, aged-looking skin, a pinched nose, and a small face and jaw relative to head size. They also often suffer from symptoms typically seen in much older people: stiffness of joints, hip dislocations and severe, progressive cardiovascular disease. However, various other features associated with the normal aging process, such as cataracts and osteoarthritis, are not seen in children with progeria.

Some children with progeria have undergone coronary artery bypass surgery and/or angioplasty in attempts to ease the life-threatening cardiovascular complications caused by progressive atherosclerosis. However, there currently is no treatment or cure for the underlying condition. Death occurs on average at age 13, usually from heart attack or stroke.

In 2003, NHGRI researchers, together with colleagues at the Progeria Research Foundation, the New York State Institute for Basic Research in Developmental Disabilities, and the University of Michigan, discovered that Hutchinson-Gilford progeria is caused by a tiny, point mutation in a single gene, known as lamin A (LMNA). Parents and siblings of children with progeria are virtually never affected by the disease. In accordance with this clinical observation, the genetic mutation appears in nearly all instances to occur in the sperm prior to conception. It is remarkable that nearly all cases are found to arise from the substitution of just one base pair among the approximately 25,000 DNA base pairs that make up the LMNA gene.

The LMNA gene codes for two proteins, lamin A and lamin C, that are known to play a key role in stabilizing the inner membrane of the cell's nucleus. In laboratory tests involving cells taken from progeria patients, researchers have found that the mutation responsible for Hutchinson-Gilford progeria causes the LMNA gene to produce an abnormal form of the lamin A protein. That abnormal protein appears to destabilize the cell's nuclear membrane in a way that may be particularly harmful to tissues routinely subjected to intense physical force, such as the cardiovascular and musculoskeletal systems.

Interestingly, different mutations in the same LMNA gene have been shown to be responsible for at least a half-dozen other genetic disorders, including two rare forms of muscular dystrophy.

In addition to its implications for diagnosis and possible treatment of progeria, the discovery of the underlying genetics of this model of premature aging may help to shed new light on humans' normal aging process.