The first reports about the unique surgery were published on Wednesday, November 30th last week. A woman received a partial face transplant during the operation conducted by a team of doctors headed by Jean-Michel Dubernard in Amiens, northern France. Dr. Dubernard is in charge of a surgery department in Eduard Herriot Hospital in Lyons. 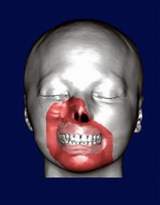 The donor tissue came from a woman who had been declared brain-dead. The 38-year-old French woman was a recipient of the donor tissue. The woman was attacked by her own dog. The lower part of her face was badly disfigured as a result. According to doctors, most of her nose, lips and chin had been gone, she could hardly eat and speak. The operation was performed on Monday, November 27th. However, doctors kept away from the press for the following 48 hours because they feared for possible postoperative rejection of the donor graft. The name of the woman has not been disclosed in line with her request. The donor's name was not disclosed either in compliance with a similar request.

Dr. Jean-Michel Dubernard became widely known in 1998 after he successfully performed a hand transplantation operation. Clint Hallam, his patient, was a New Zealander who lost his hand while working on a sawmill. Several dozen similar operations have been performed in different countries since 1998.

None of the experts who have commented on the surgery so far called into question Dr. Dubernard's remarkable new achievement. The transplantation, even though a partial one, of the donor tissue onto a face of another person is an unprecedented event with regard to technical complexity of the operation and some moral and ethical aspects of it.

Several operations for the facial skin restoration including transplantation of the large grafts of skin have been performed over the last few years. All operations involved the use of autografts (self-grafts) to minimize the possibility of rejection. But the end result was hardly a completely satisfying one. The thing is, facial skin differs greatly from the skin on other body parts as to its makeup, color, and structure. A successful transplant operation could save a patient from physical sufferings caused by the injury. In some cases transplantation could be the only way of restoring a patient's ability to eat on its own and speak clearly. Nevertheless, moral sufferings were still there even after transplantation had been successfully completed. A large skin graft e.g. taken from a person's back (the case of a Japanese burn victim) could hardly match the color and texture of facial skin.

Doctors in different countries have been discussing an alternative way of facial transplantation involving the use of the donor tissue. A number of doctors in Lyons, Paris, London, and Cleveland were getting ready for the procedure while looking for a donor. Though nobody doubted that such an operation could be done from the technical point of view, doctors had second thoughts regarding uncontrollable psychological and ethnical impact caused by the procedure on the patient. It is quite difficult to imagine a gamut of emotions a person would go through while looking at the face of a dead stranger in his mirror day in and day out. It is even much more difficult to imagine how the donor's relatives would react should some of them run against a person wearing the face of their loved one who has been dead for years.

Enthusiastic supporters of facial transplantation try to dispel the fears and doubts by saying that it is practically impossible to achieve complete similarity between the donor's face and that of the recipient because facial features are formed not only by a face transplant but also by a facial bone structure. According to doctors, there will be a “hybrid combination” of “original” and “somebody else's” facial features in the case of Dr. Dubernard's patient.

Meanwhile, journalists dug out some of the details regarding the incident that the patient's face badly disfigured. According to the patient's daughter, the dog attacked the woman after she attempted to take her life by swallowing a lethal doze of sleeping pills. She reportedly passed out. (Dr. Dubernard denied the alleged circumstances of the incident published by the papers. According to him, the woman took the sleeping pills to calm down after a family dispute. Dr. Dubermard claims the doze was not a lethal one by any means. The suicide story was a complete fabrication on the part of journalists, said the doctor. "Spreading false information about personal life of my patient is outrageous,” added he.

Speaking on a press conference last Friday, Dr. Dubernard and his colleagues insisted that they did the right thing when agreed on the operation. Restoring the patient's face was part of the problem. The patient was unable to eat and speak because her lips were missing. Dr. Dubernard pointed out one more time that present-day plastic surgery could not use autogrtafts for restoring the lip tissue.

According to doctors, the first word of the patient was "thank you" when she awoke after her surgery.