Up to 90,000 patients die in US hospitals every year because of medical malpractice

Yakov Brand, head of the section of immediate cardiac surgery of the Sklifasofsky Research Institute of Emergency Medical Help, doctor of medical sciences, the Russian State Prize laureate, the Moscow Health Department Prize laureate. He is also a journalist and an anchor of TV show Over the Counter. “I am very afraid of falling ill because I know too much about medical malpractice,” says Yakov Brand.

Dr. Brand is confident that a doctor who makes a lot of errors should not practice medicine at all. At the same time, he volunteered to defend his colleagues since “a thousand medical errors claim only one life.” I wonder if anybody is ready to join that small number of casualties. 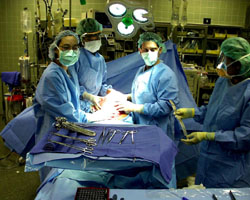 Q: Dr. Brand, lately there has been a lot of TV shows and articles in the press concerning medical malpractice. You have been a practicing surgeon for many years. Do you think that medical errors can be 'programmed?'

A: Medical malpractice exists, no doubts about it. The cases shown on TV are really horrendous. I feel like killing the doctors who make such errors. Bur the scary TV shows just scare people and promote self-treatment. Journalists are not interested in making a report on a doctor who cured a patient. But they are keen to report on a doctor who killed his patient. I do not understand what those “scary medical shows” are meant to do.

Some unknown lawyer provides his comments on cases reported in a show. Who the hell is he? Looks like somebody paid the money to have those shows filmed, produced and put on the air. You know, they just lie in broad daylight by saying that doctors in Russia do not keep a record of lethality. On the contrary, all cases of lethality are put on record. Complication cases are put on record too.

Q: Do they provide any evidence to support the facts they talk about?

A: Yes, they provide evidence… in favor of their customers. One of the shows was about an accordion player who lost his finger in an accident. The finger can be restored only in a foreign hospital at the expense of the government, says the host. Oh, really? Similar operations have been performed in this country since 1981 (!) in a number of medical centers. Drs. Krylov, Stepanov, Akchurin are the pioneers in this field, they are the first-rate specialists. Why should we send a patient abroad if an operation can be performed here in Russia free of charge?

Q: In your opinion, what should be done to reduce the number of medical errors?

A: An independent system of expert procedures should be set up. It should be really independent from the federal or local medical authorities. A basic mechanism for revoking doctor's license is still missing. We can not strip a doctor of his license even if he is totally incompetent.

Q: A doctor can lose his license temporarily in accordance with a court ruling.

A: Yes, he can lose it if he is found guilty by a court of law. However, just a handful of doctors go on trial for medical malpractice. Well, thank Godfor that because every doctor makes an error sooner or later. It is a different story when a doctor is making 'errors' all the time. The errors may not be errors at all. It may be a case of plain incompetence. Therefore, it should be examined by an independent expert commission consisting of specialists. A competent commission convenes to consider complaints filed to the Moscow Health Department. From 10 to 15 complaints out of 100 complaints are found substantiated by the commission. Eventually, only four or five complaints of those found substantiated are referred to the prosecutor's office.

Q: Dr. Brand, does it occur to you that doctors have not had any problems with the law for the last 10-15 years? They have become the untouchable in terms of legal proceedings?

A: Doctors always had problems with law, if my memory serves me right. In the 1970s you could be jailed for accepting a bottle of brandy, a gift from a grateful patient. Nevertheless, I do not remember any case involving a doctor thrown into prison for malpractice in any county. There will be no doctors left if they are jailed for making errors.

Q: But you are not going to maintain that all doctors are highly qualified specialists and there is no such thing as negligent doctors, are you? The number of errors will be growing if we do not disclose them. What kind of punishment should entail involuntary manslaughter of a patient?

A: Negligence is subject to criminal prosecution. The Criminal Code has special clauses concerning the crime.

Q: Has Russia ever had any organizations dealing with the assessment of medical errors?

A: No, it has not. It high time we had an independent expert body.

Q: Do you believe in its independence in this country where everything is for sale these days?

A: You can not buy a person who is a perfect stranger to everybody involved. Besides, experts should be paid decent salaries. They will not be corrupt in this case.

Q: It is obvious that an independent expert body is badly needed. Why do you think nothing is being done to set it up?

A: Today one may claim for damages only in private clinics. A body authorized to file claims for damages to all medical institutions can make bankrupt any hospital. Thus the government will be held responsible for medical malpractice. But we should make the government take necessary steps. The officials will never change the situation if we do not make them change it.

Q: What would you do if you were a health minister?