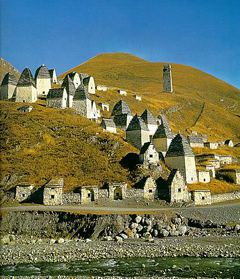 Dargavs used to be considered one of the largest settlements in Ossetia. At the moment there are only about ten buildings here. The settlement is located on the bank of the river Gizeldon in the very center of a mountain hollow that appeared thousands of years ago as a result of glaciers melting. Today it is one of the largest valleys in Ossetia. It is 16 kilometers long. Besides, it is one of the sunniest places in the republic: up to 300 days a year are clear and sunny. Dargavs hollow is protected from nebulous fronts and winds by the mountains. That is why there is a special microclimate. It is dry even in autumn and winter. Besides, there are a lot of plain surfaces in the hollow, which is rare for mountain gorges. These unique conditions allow people living here to make living by stock farming and agriculture.

The place is really spectacular. Beautiful landscape is accompanied by the ruins of the Hussar-Hintsag settlement and two towers that were once a part of a castle.

Unexpectedly enough it is in this beautiful place that the gloomy city of the dead is located. There are 95 constructions on the territory of necropolis. The tombs of the necropolis can be divided into three types. Some of them are located underground and their tops look like graded pyramids. Other tombs are crowned with gable lift slabs. Tombs of the third type are half underground and look like rectangular cells constructed with large stone flags. Here the same construction methods were used as for building defensive fortifications. “It can be explained by the fact that both types of constructions appeared approximately in the same period. Local architectural traditions should be taken into account as well,” archeologist Elbrus Kantemirov says.  Then he goes on: “However, it still remains a mystery why Ossetian tombs resemble temple towers of the Angkor complex in Cambodia”.

The tombs served for burial of several generations of the one family. Some of the constructions have two or even three layers. When there was no space left people would make extra flooring.

While studying burial places archeologists found many objects dated from different epochs. The most amazing of these objects are so called boats. In many cases the remains of the dead were found in wooden blocks that resembled boats. This type of burial is distinct and was not common among neighboring peoples. Boats were found in Dargavs more than once. One of them even had an oar beside. Its purpose remains a mystery; especially in the area where even the largest rivers are unnavigable.

Of course, it is not about navigation at all. “There is no place you can navigate a bout in Dargavs,” PhD in history, Vladimir Kuznetsov says. “We should be looking for the explanation in the ancient cult, which existed among the Ossetins almost till present time and is yet to be thoroughly studied. The river Styx comes to mind immediately where Charon was transporting the dead souls in his boat. Maybe, there is some connection between the classical myths and this burial in the boats”.

More than 1,5 thousand objects found in Dargavs gorge provided more information about the Ossetins’ culture. For their final trip to the land of dead Ossetins took objects that were brought from other places: oriental fabrics, snuffboxes, Georgian ceramics and even Russian glassware. Thanks to these objects discovered archeologists managed to establish the age of the tombs. They claim that the first tombs appeared here at the beginning of the 17th century. The latest burial places date back to the 1830s.

Locals try to avoid going to the city of the dead. They say that anyone who dares get into the burial place will lose his own life. It seems that people still keep in their memories the plague at the turn of the 18th century. As a result the population of Ossetia declined from 200000 at the end of the 18th century to 16000 in the middle of the 19th century.

The bad name of the city of the dead even influenced modern researchers. “In 1967 medical science could not provide us with exact answer whether there were still plague pathogens in the area. That is why we had to do different test to check this. But even then we were not guaranteed safety. Almost all of the expedition members preferred working in gloves. Those who were trying to show off and didn’t wear gloves were considered brave”.

Ossetins keep their traditions for a long time. Maybe that is the reason why Dargavs is known as scary and dangerous place.