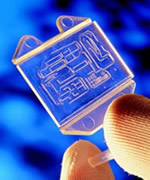 The development of nanotechnologies is on top of the list of the prioritized scientific lines and critically important technologies signed by Russian President Vladimir Putin.

NANO-2005, the 5th National conference on the use of X-ray and synchrotron radiation, neutrons and electrons for research of materials was held in the Institute of Chrystallography. The conference was co-chaired by academician Yuri Osipyan and corresponding member of the Russian Academy of Sciences Mikhail Kovalchuk. Participants of the conference discussed a variety of subjects related to nanotechnologies. The conference aimed at combining efforts of specialists involved in the study of materials and development of nanomaterials, technologies and nanosystems. The above-mentioned specialists should join forces with those who develop new diagnostic methods using various kinds of radiation e.g. X-rays, synchrotron radiation, beams of neutrons and electrons. Setting up national centers for the developments of nanotechnologies based on sources of synchrotron radiation and neutrons is one of the most important issues. The Kurchatov Institute in Moscow is one of many institutions of the kind.

The chairman of the Organizational committee of NANO-2005, Mikhail Kovalchuk, stressed the importance of international coordination of efforts as to the development of nanotechnologies. About 40 representatives of the world's leading research centers dealing in nanotechnologies and the use of synchrotron and neutron radiation attended the conference. The European Community allocates 18 billion euros for scientific projects. Twelve percent of the sum go to nanotechnologies.

Russia has a number of achievements in the field of nanotechnologies. The country does have excellent chances to take the lead. Two of a two dozen European sources of synchrotron radiation are located in Russia. One operates in the city of Novosibirsk, the other one is in the Kurchatov Institute. A third one is under construction in the city of Zelenograd (the Moscow region). Scanning probe microscopes are considered the best in the world, they were designed in Zelenograd. The microscopes are used by 90 institutes of the Russian Academy of Sciences. European research centers have been purchasing those microscopes for several years. A series of biotechnology experiments have been conducted at the Soviet space stations since the 1970s. Proteins and very pure materials including semiconductors have been drown in zero-gravity conditions. Researchers at the International Space Station carry out similar experiments these days.

It was Norio Taniguchi who first came up with the term 'nanotechnology' in 1974. The Japanese researcher suggested that the term be used for describing the process of construction of new objects using individual atoms as construction materials. Nanotechnologies have to do with objects measuring one billionth of a meter i.e. the size of an atom. The first atomic power microscope was built in 1986. Unlike electronic equipment that enabled researchers only to watch the microworld, the present-day nanotechnological tools make it possible to change this world by building molecules whose properties can be designed as required.