Scientists discover frozen mummy, which kills those who shatter its peace

That was probably not a mere invention of Hollywood filmmakers who created The Mummy to say that a human body is still a serious threat even after death. In 1991, in the Alps on the Austrian-Italian border German tourist Helmut Simon quite suddenly spotted a mummy of an iceman who died 5,300 years ago. The frozen body was dressed in clothes made of fur and leather footwear; it also wielded a bow with arrows. The discovered man was named Oetzi. 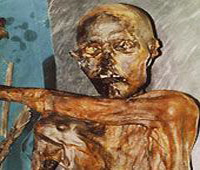 The discovered body was  preserved wonderfully; its clothes revealed an absolutely detective intrigue. There were bloodstains on it left by some four people who probably killed him. The Neolithic man aged 42 at the moment of his death which was much more than the average lifetime of his contemporaries. When the body was exposed to X-rays, researchers discovered fragments of an arrow-head, which proved the man had died a violent death. Other indications such as very intricate tattoos and bloodstains left by several men on the clothes of the discovered body suggested that the victim could be a shaman.

What is more, the Russian newspaper Arguments and Facts and an Italian researcher, whom the newspaper mentions in this connection, state that the first analysis of Oetzi's things revealed they belonged to different epochs. That sounded quite a sensation! His arrows are 7,000 years old, the axe belonged to the Crucifixion epoch and the skin in which the man was dressed originally belonged to a goat that lived in China. Oetzi could supposedly be an ancient pagan priest of some unknown cult whose supernatural abilities even allowed him to travel in time.

That was highly likely that a special curse was cast on the man during his life; that was a mystical procedure promising terrible retribution to those who will trouble his dead body in the future. In this connection, some researchers believe that Oetzi's curse is still effective and seriously hurts those who trouble his dead body.  Indeed, several people who touched the remains of the ancient shaman have already died since the body of the iceman was discovered. And tourist Helmut Simon who had found the body fell the first victim of the curse.

Being triumphant after a suit when the court decided the German tourist would get $100,000 for finding the mummy Helmut in fair weather went to the site where he had come across the iceman. But suddenly he was caught in snowstorm and froze to death. When life-savers found Helmut's body he was lying in the iceman's pose. The head of the rescue crew Dieter Warnecke who discovered the frozen tourist died of a heart attack an hour after Helmut was buried.

Doctor RainerHennwho conducted an expertise on Oetzi fell the third victim of the curse. He died in a traffic accident on his way to a scientific conference dedicated to the discovery of the iceman.

Professional mountain-climber Kurt Fritz also died probably because of the mummy curse. The man organized delivery of the shaman remains in a helicopter. Soon, he was tragically killed by an avalanche in an area which he knew perfectly well. At that other mountain-climbers who accompanied him stayed alive.

In two years, Austrian journalist Rainer Hoelzl who shot a documentary about the iceman died of brain-growth. Konrad Spindler who headed a research group studying Oetzi at the University of Innsbruck died of disseminated sclerosis. The researcher was 66 years old, he knew about the mummy spell but openly laughed at the rumors.

Recently, the world knew about another victim of the mummy curse. Doctor Tom Loy, 63, died under unknown conditions in Australia. The researcher studied Oetzi's DNA.

For the time being, the killer mummy is being kept at the Museum of Archeology in Italy's Bolzano flooded by visitors wishing to see the mysterious discovery.

The Oetzi curse is usually believed to be resembling the Tutankhamen mummy curse. In February 1923, an ancient tomb was opened in the Valley of the Kings in Luxor, Egypt, where researchers found the mummified body of young Pharaoh Tutankhamen and his death-mask made of gold. Some time after the discovery, head of the expedition Lord Carnarvon died of a mosquito sting but the death was believed connected with the ancient curse. The researcher developed erysipelas, then sepsis and pneumonia broke out, and finally the lord died a painful death. Witnesses say that shortly before the lord's death his dog began to howl and died together with its master for some unknown reason. Soon after the tragic death, it was rumored that the Tutankhamen curse fell on the archeological expedition.

Written records of Archeologist Howard Carter state that there were 25 Europeans more on the archeological dig and thus they were exposed to the “curse” but 11 of them did not get inside of the tomb. Researcher Mark Nelson from Australia's Monash University decided to find out if the visit to the Tutankhamen tomb had any effect upon the subsequent life of people participating in the expedition. It turned out that average lifetime of the expeditors who entered Tutankhamen's tomb was slightly shorter than that of other members of the expedition. However, nothing extraordinary occurred to the people and they died because of quite clear reasons. That is why Mark Nelson decided that no Tutankhamen curse actually existed.