The French scientist Lauert arrived in Egypt 60 years ago. He was going to unravel the mystery of the pyramids. The scientist is still in Egypt. These days the 90-year old researcher says he has to crack more mysteries than before. Pyramids still remain the world's wonder No.1 since everything we know about them is mostly guesswork and speculation. Tatyana Shakurova, an Egyptologist at the Institute of Oriental Studies in Moscow, shared her views of some mysteries relating to the Egyptian pyramids. 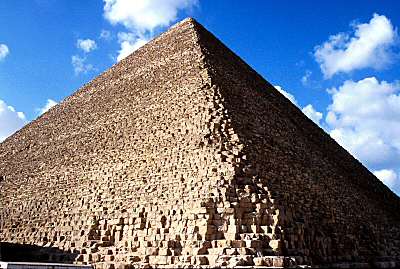 On the face of it, the answer looks cut-and-dried. A pyramid is the simplest most complete structure. In the meantime, a pyramid may embody the myth about afterlife. The myth evolved along with the architectural concept as time went by. The earliest tombs were shaped like holes in the ground, they had steps leading downward. Later tombs began to resemble benches. Finally, they turned into pyramids with steps. The pyramids of Cheops (Khufu's pyramid), Chephren, and Mykerin had steps on them too; they were lead-lined. The structures were apparently meant to help dead pharaohs go to heaven using the steps.

Those who study paranormal phenomena outside the official scientific institutions have a number of theories with regard to the mystery of the pyramids. One theory says that the rocks of the Great Pyramid conceal a system of interrelated figures, measure, weight, angles, temperatures, degrees, geometrical problems, and information on space. Another group of researchers believe that the pyramid was primarily used as a giant solar observatory. A third group of like-minded researchers focused on the shape of a pyramid that is said to be capable of exerting physical influence on living beings and inanimate objects. Some people were making money out of the pyramids. J.Patrick Flanagan, a resident of California, started selling miniature pyramids which he said were capable of enhancing energy of any place. Once placed inside the model of a pyramid built by the above gentleman, the lucerne shoots grew quicker than in a hothouse. A dog turned into a vegetarian after spending some time in a pyramidal “dog house.” A pyramidal water purification plant was built in Romania in 1989. It was reported that the facility could kill the microbes. Some reports said that pesky children calmed down, sleep became sounder, and sexual activity increased if people choose to spend a certain period of time in pyramid-like buildings. In 1903, Mr. Alister Crowley who called himself the “Big Beast” of the occult, was paid to spend his first nuptial night in a burial chamber of a pharaoh. But the nuptials run into logistical problems due to an ice-cold floor in the chamber. Both sex and sleep were out of the question.

Where are all those mummies?

One can imagine researchers' disappointment when they unsealed Cheops's sarcophagus and found a small statuette in lieu of a mummy. Tutankhamun's mummy was the only mummy discovered in its entirety during the whole history of Egyptian archeology. The remaining mummies of the ancient kingdom are still unfound. After all, were there any mummies inside the sarcophaguses? Mrs. Shakurova believes that there is a logical explanation behind the missing pharaohs. Ancient Egyptians liked mystifications and therefore a king should go to heaven when he dies. Priests helped him disappear by concealing his body in a secret place.

How did they build them?

Ancient Egyptians partook in carrying out a construction project or a similar undertaking. They believed that that any orders by a pharaoh were coming from god. By the way, archeologists unearthed ruins of a village that used to be populated by labourers at the time of the construction of the pyramids. The finds confirm a theory about hired labour as opposed to slaves used at the time. Thousands of people lived in the village, and their daily needs as to board and lodging were effectively taken care of.

Why haven't Russian scientists made any discoveries in Egypt?

Russian scientists have not studied the pyramids on location yet. Moreover, they are unlikely to excavate in the area in the near future. The issue boils down to money. Digging in the sand in Giza would cost millions of dollars. In other words, only the French can come up with new discoveries related to the world's greatest wonder. The French have been around since Napoleon's time. They spend huge funds on the study of culture of the ancient Egypt.

The Egyptians do not allow foreign scientists to excavate on their own. Locals formed the professional dynasties specialized in excavations. Egyptian inspectors continually watch the operations of foreign archeologists so that any find can not be taken out of the country. By some reason, the Egyptians have stopped following the international agreements which stipulate that a foreign party may possess a part of finds discovered on site.