A pheromone is a chemical that triggers an innate behavioural response in another member of the same species. There are alarm pheromones, food trail pheromones, sex pheromones , and many others that affect behavior or physiology. Their use among insects has been particularly well documented, although many vertebrates and plants also communicate using pheromones. 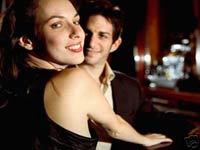 In animals, sex pheromones indicate the availability of the female for breeding. Many insect species release sex pheromones to attract a mate and many lepidopterans can detect a potential mate from as far away as 10 km (6.2 miles). Pheromones can be used in gametes to trail the opposite sex's gametes for fertilization. Pheromones are also used in the detection of oestrus in sows. Boar pheromones are sprayed into the sty, and those sows which exhibit sexual arousal are known to be currently available for breeding.

Male animals also emit pheromones that convey information about what species they are, and their genotype. The purpose of pheromones giving information about genotype is a mechanism to avoid inbreeding. Females are attracted to males with the least similar genotype, which means they are attracted to males who are the least likely to be related to them. An exception to this is when the female is pregnant. ( Reference: Wikipedia )

Having proved the existence of pheromones with animals and insects, scientists supposed that human beings may produce pheromones too, They were right. However, the situation with human pheromones appeared to be much more complicated.

Scientists from the Russian Academy of Medical Sciences suppose that people use sensitive cells from nasal septum when choosing sexual partners. The information is transmitted directly to the brain. Even if a person does not have the so-called second nose, he or she is still capable of detecting these chemical signals.

According to most recent reports, some groups of human nasal cells can perform the function of the second nose.

Some scientists believe that the second nose is the organ of the well-known sixth sense or intuition. This organ helps people chose their partner on genetic level.

Every person has their own natural odor that carries the information about his or her genetic code , which determines the sexual suitability of two people. That is why it is almost impossible to create a perfume with pheromones that could attract any man to any woman.

Going against the laws of Nature always leads to lamentable consequences. Alien pheromones could hardly have any effect on person’s sexual preferences. However, different odors can easily be easily used to in everyday life too, for inciting the shopping passion with customers, for example.

For example, it is an open secret that people associate the smell of freshly baked bread with home comfort That is why many large grocery stores have their own bakeries situated near the entrance to the store. When entering the store a consumer smells freshly baked bread and starts thinking of the store as a very comfortable place where it is very pleasant to shop for something.

A lot of supermarkets have special employees called aromadesigners. Their prime goal is to create a suitable smell for the sales area to make consumers buy something there. As a rule, aromadesigners are very successful in reaching their goal. To crown it all, pleasant aromas leave good memories, which subsequently make people visit this store again.