USA and Russia start Cold War over the Moon

The chief of Russia's space agency said that the United States has rejected a proposal for the two countries to explore the moon together, a Russian news agency reported. 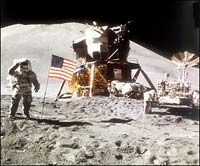 USA and Russia start Cold War over the Moon

A NASA spokesman in Washington said the U.S. was unaware of any Russian proposal, and was perplexed by the space chief's claim.

NASA announced in December that it would establish an international base camp on one of the moon's poles, permanently staffing it by 2024. Officials with Russia's federal space agency, Roscosmos, later said they had hoped to join NASA's program, contributing Russian technology and space experience.

But Roscosmos chief Anatoly Perminov was quoted by the Interfax news agency Sunday as saying that the United States had rebuffed the offer.

"We are ready to cooperate but for some reasons the United States has announced that it will carry out the program itself," he was quoted as saying on Russian television.

"Strange as it is, the United States is short of experts to implement the program," he said.

Michael Braukus, a NASA spokesman in Washington, said the agency had received no lunar exploration proposal from Roscosmos.

"We haven't rejected anyone's proposal," he said. "We are really into involving the international community in this ... We're very interested in getting more involved and cooperating in our exploration efforts."

Perminov also said Russia had signed a $1 billion contract with NASA for Russian cargo ships to deliver goods to the international space station over the next three years - an indication, he said, of the competitiveness of Russia's space services.

"If we had been uncompetitive, such contracts would not be signed," Perminov was quoted as saying.

Russian space craft have been the workhorses of the international space station program, regularly shuttling cargo and people to the orbiting station - in particular after the U.S. space shuttle fleet was grounded following the Columbia disaster in 2003, the AP reports.

While the Americans have either been coy or dismissive on the subject, Russia openly says the main purpose of its lunar programme is the industrial extraction of helium-3.

Dismissed by critics as a 21st-century equivalent of the medieval alchemist's fruitless quest to turn lead into gold, some scientists say helium-3 could be the answer to the world's energy woes.

A non-radioactive isotope of helium, helium-3 is a proven and potent fuel for nuclear fusion - so potent that just six metric tons would supply Britain with enough energy for a year.

As helium-3 is non-polluting and is so effective in such tiny quantities, many countries are taking it very seriously. Germany, India and China, which will launch a lunar probe to research extraction techniques in September, are all studying ways to mine the isotope.

"Whoever conquers the moon first will be the first to benefit," said Ouyang Ziyuan, the chief scientist of China's lunar programme.

Energia says it will start "industrial scale delivery" of helium-3, transported by cargo space ships via the International Space Station, no later than 2020. Gazprom, the state-owned energy giant directly controlled by the Kremlin, is said to be strongly supportive of the project.

The United States has appeared much more cautious, not least because scientists are yet to discover the secrets of large scale nuclear fusion. Commercial fusion reactors look unlikely to come on line before the second half of this century, telegraph.co.uk reports.