Earth to stretch sideways and then turn into a cold star

Earth is a living body: its form varies from time to time, its continents go apart and crawl against each other, whereas earthquakes and convulsions of nature shake Earth on a regular basis. NASA's recent research works show that Earth is stretching to the sides. Furthermore, there is every reason to believe that some day the planet will inevitably become brighter than the Sun and the latter will turn into a cold planet. 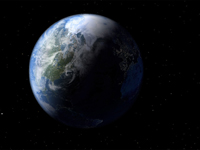 The shape of the planet determines gravity, and consequently it influences the trajectories of satellite orbits and the accuracy of telecommunication signals going to space centers on the surface. This explains why NASA is so much anxious about the problem. In the mid-19th century, artillery general Alfred Drayson studied bomb trajectories and arrived at a conclusion that the planet was getting wider, a rather courageous statement for that epoch indeed.

NASA experts have modernized the old theory. The ice melting on the poles results in the elastic return effect in the mantle. The mantle, a thick layer of melted rock between the core and the earth's crust, acts like a sponge ball recovering after squeezing during glacial periods and global warming. In the recent years, the planet has suddenly started to swell. The phenomenon is even registered with high-accuracy lasers tracing satellites in the orbit. None of the surface processes can entail such an effect. The Earth's radius increases by about one millimeter a year and the ocean level goes up. For example, the Baikal Lake gets 2 centimeters wider every year. The NASA statements are also confirmed by paleo-magnitology experts restoring continents outlines as they were millions of years ago.

Paleo-magnetologists have determined that the speed of the Earth's rotation dropped in the prehistoric times already. The reconstruction demonstrates that the planet rotated very quickly 3 billion years ago. At that time, the day lasted for 19 hours, and experts state that  days will last for 25 hours in 100 million years.

It is difficult for the “swelled” planet to rotate around the Sun; the day becomes 0.0023 seconds longer every century. As a result, the Earth is inevitably moving away from the Sun. In addition to tectonic processes, the planet gets wider also thanks to the interstellar dust coming to its surface. According to even modest estimates, this dust adds at least 1 billion tons every year. Some experts say that dinosaurs became extinct because of the planet's growth and the proportional increase of gravitation; under those conditions dinosaurs could no longer bear their own weight.

How long will the Earth's swelling last? In several billions of years, collapse processes typical of all stars will begin on the heavy Earth. When the planet's weight exceeds the breaking point, a chain reaction will start inside the planet. The Earth will become some sort of an atomic bomb under the enormous pressure and will reach the temperature of the Sun. This means our planet may become another star.

People on this planet will be able to witness a similar process when Jupiter, the biggest planet of the Solar system, will become a star. In some parts of Jupiter the surface temperature reaches 1,000 degrees. Astrophysicists believe that Jupiter will become a star, move away from the Sun together with its 12 satellites and form a new planetary system.

Author`s name Olga Savka
15:17
Armed Forces of Ukraine drop chemical bombs from drones - DPR governor
14:59
Russian Olympic ice dancing champion develops gangrene of his leg
18:54
Ukrainian soldier uses chainsaw and fire to release US howitzer from ice trap
18:30
Onet: Ukraine will lose in six months due to shell shortage
17:36
Russian troops defeat Ukrainian troops in Zaporizhzhia region
14:50
Number of foreign mercenaries in Ukraine continues growing
14:17
Russians buy more than 50 tons of gold in 2022
13:57
Russia will not talk to Ukraine. Russia will talk to the West
13:34
USA's plan to give 20 percent of Ukraine for peace hoax
12:51
Medvedev: Ukraine as a state to be devastated, go bankrupt and be turned into colony
Drone with large air bomb on board explodes over Kaluga in western Russia