Mr. Stevens claims that Russian military specialists were behind the fury of Hurricane Katrina that devastated New Orleans. According to him, Russia has built secret equipment for causing a detrimental impact on the weather way back in the Soviet era. 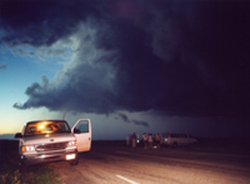 U.S. media quickly spread the news around. Both Russia and the U.S. were long rumored to have been involved in the development of meteorological weapon. But those rumors seemed too wild to searching a grain of truth hidden underneath. In the meantime, some Russian politicians say the experiments have been conducted and still conducted on either side of the ocean. Following death and destruction caused by Katrina, The Americans promptly unearthed the controversial interview by Vladimir Zhirinovsky in which he threatened to unleash floods all over the United States when “our scientists slightly change the earth's gravitational field.” Nobody got scared watching the drunken boss of the Liberal Democratic Party promise doom's day for the United States. But once Katrina struck and the southern part of the U.S. got drowned, the improbable rumors about Russia's meteorological weapon came to light again.

American meteorologists are not the only ones who blame the neighbors for using the “hurricane gun.” Unconfirmed and patchy reports on questionable experiments with weather conducted by the U.S. and Soviet Union stirred up a number of political scandals in many countries of the world. Following a large-scale flooding in Europe in 2002, some European politicians put the blame on the “U.S. military” for disrupting EU economy. In 2002, Committee for Defense of the Russian Duma raised the issue about a detrimental impact on climate caused by experiments involving disturbance of the earth's ionosphere and magnetosphere. The deputies focused their attention on HAARP system that is still under construction in Alaska.

There is a special facility located at a military installation some 400 km north of Anchorage. A huge area of tundra features thousands of 25-m antennas pointing to the sky. The facility is called High Frequency Active Auroral Research Program (HAARP). U.S. Marines patrol the vicinity of the base. No commercial or military aircraft are allowed to fly over the base. Air-defense systems Patriot were installed around the base following the 9/11 terrorist attacks.

U.S. Navy and U.S. Air Force combined efforts building the facility. Open information sources indicate that the facility is used for causing active influence on the earth's ionosphere and magnetosphere. The results could be fantastic, according to scientific journals. Scientific journals claim that HAARP is capable of causing artificial aurora borealis, it can also jam radar stations of early ballistic missile detection systems, communicate with submarines in the ocean and even detect secret underground complexes of the enemy. Radio-frequency emission is capable of piercing through the ground and examine hideaways and tunnels, it can burn out electronics and destroy space satellites. The equipment can also impact the atmosphere and thus cause changes in weather. HAARP is allegedly used for causing natural disasters similar to Huricanes Katrina and Rita.

Three years ago the Duma deputies held a heated discussion of issues related to HAARP. They even drew up an appeal to the President Putin and the UN. They demanded to set up an international commission for the investigation of the experiments conducted in Alaska.

Speaking to Nezavisimaya Gazeta, specialist for active influence on the atmosphere of the Federal Service of Hydrometeorology and Environmental Monitoring Valery Stasenko said HAARP is a “very serious issue.” “It is not for nothing that the term 'space weather' has become quite popular lately.

The term stands for interrelation between the solar activity, magnetosphere and ionosphere perturbations and developments in the atmosphere. Perturbations in the magnetosphere and ionosphere can really impact climate. Using powerful equipment for deliberately bringing about perturbations, one can impact weather too, even on a global scale. I believe the deputies were right in finally raising the issue regarding the experiments in the U.S.,” said Mr. Stasenko.

Russian politicians are head over heels debating plans of U.S. imperialists and their bloodthirsty military, man-made disasters and floods. They are probably totally unaware that Russia has long build it own facility similar to HAARP. The facility Sura is as powerful as HAARP. It is located in Russia's central area, in a remote and desolate place some 150 km from the city of Nizhny Novgorod. One of the leading scientific research institutions of the USSR, Research Institute of Radiophysical Studies, owns the facility.

“There are only three facilities like this in the world, one is in Alaska, the very HAARP, one in Norway, and one in Russia,” said Nikolai Snegirev, director of the above institute. The facility was commissioned in 1981. “Using this unique facility, researchers achieved extremely interesting results regarding the ionosphere behavior. They discovered the effect of generation of low-frequency emission at the modulation of ionosphere current. At the beginning, Soviet Defense Department mostly footed the bill for similar research projects. Alas, no research like that has been conducted at the facility since the collapse of the Soviet Union. These days we are involved in the international projects for research of the ionosphere,” said Mr. Snegirev.

Sura looks quite seasoned and a little bit rusty. Against all odds, it still works. There are straight lines of 20-m antennas standing in an area of 9 hectares. A giant emitter the size of a country hut sits in the center of the field, the emitter is used for studying acoustic developments in the atmosphere.

Researchers at the Sura can not yet conjure hurricanes similar to Katrina and Rita. At least they say they can not. However, they conduct research (on a smaller scale than in the U.S.) of interrelation between the natural disasters and perturbations in the ionosphere and magnetosphere.

“It is possible to impact weather. However, neither Russians nor Americans are capable at the moment of creating something like Hurricanes Katrina or Rita. The capacity of the facilities is too low. The Americans are going to switch HAARP into its design capacity. Still, it will not be enough for effectively causing natural disasters,” said Yuri Tokarev, head of department of solar and terrestrial relations of the Research Institute of Radiophysical Studies.

Technologies of the secret research institutes that used too be classified and inaccessible become available to non-military researchers. One of the devices was recently tested thanks to support of the Russian Academy of Natural Sciences.

“We produced lots of interesting results during the first test of the ionic generator,” said Academician Mikhail Shahramanyan. “A stream of oxygen ions was going up and could either result in a local rupture of the clouds or bring out overcast sky, depending on a work mode of the device. We managed to form cumulonimbus overcast sky over Erevan in April 2004. We used two GIONK type devices when the sky was clear. According to protocols verified by independent observers, between April 15 to April 16 in Erevan precipitation totaled to 25mm-27mm,” said Academician Shahramanyan.