Romeo and Juliet were dinosaurs

There are three settlements in Russia that are known as recognized dinosaur cemeteries: the settlement of Kundur in the Amur Region, Undory in the Chelyabinsk Region and the village of Shestakovo near the city of Kemerovo. Recently, St.Petersburg researchers came back from an expedition to the latter. 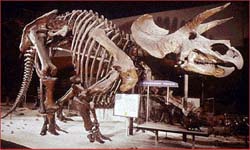 The village of Shestakovo is known worldwide: bones of ancient dinosaurs are scattered all over the place. That is why the village attracts not only professional researchers but also illegal diggers who find and sell dinosaur bones to private collectors for huge money. It is said that some collectors may pay up to $6 million for a complete dinosaur skeleton. Dinosaur eggs, teeth and bones cost from several hundreds to tens of thousands of dollars. In a word, dinosaur skeletons sell perfectly well. A serious dinosaur collector spends about one million of dollars a year to buy new samples for their private collection.

Paleontologists tell that in 1995 illegal diggers seized a Psittacosaurus skeleton that was packed ready for delivery to a research laboratory. Some strangers arrived to the archeological dig and got the box with a two-meter skeleton. The criminals were caught red-handed and even a criminal case was filed against them. But the people presented a license according to which they had the right to excavate dinosaur bones staying on the surface. As the box with the stolen skeleton actually was found on the surface the police had to release the thieves.

Villagers in Shestakovo say they are tired of finding dinosaur bones in their kitchen-gardens every spring when they plant vegetables. Pseudo-archeologists offer locals to collect bones and then buy them for some little money. Paleontologists say that as a result of such sweeping collection of bones rare bones may actually get lost. It is planned to build a federal highway going from the city of Chita to Khabarovsk which, as paleontologists state, will destroy a unique dinosaur cemetery in Kundur. The rarest finding of a helmet-shaped dinosaur was made right on the cemetery.

Paleontologists say there is no legal market of prehistoric antiquities in Russia; dinosaur bones can be sold on the black market only. Once, senator from the Amur Region Galina Buslova came across a report on the Internet saying that a 12-meter dinosaur skeleton was sold for $5.8 million through a web auction in the US. The senator offered selling one of the three dinosaur skeletons discovered in Kundur the same way to improve the region's financial situation. But the Russian Ministry of Culture explained that neither the senator nor the Amur governor were authorized to do that.

This year, St.Petersburg researchers made a sensational finding in the village of Shestakovo. They discovered well-preserved skeletons of two Psittacosaurus dinosaurs that were tragically killed with a fallen tree during the moment of their act of love. The researchers named them Romeo and Juliet. Paleontologists know that Shestakovo dinosaur cemeteries are unique with lots of remarkable findings still hidden there. Unfortunately, paleontologists have not enough money to excavate, pack and deliver all dinosaur skeletons they find to research laboratories. That is why many of unique bones still remain in the ground of the village. The Russian Government appropriates just 300 thousand rubles a year for paleontology excavations while they need 1.5 million rubles for this purpose.