An international group of researchers has successfully completed tests of a new method that allows “converting red blood cells of any blood group into the universal zero (0) group”. The discovery done thanks to contemporary researchers and modern technology will help make the blood transfusion procedure almost absolutely safe. It also makes donor blood completely compatible with a recipient’s blood. A special solution containing enzymes of some bacteria that was discovered by the researchers can quickly convert A, B and AB groups of blood into the universal blood of the 0 type and save lives of numerous patients. 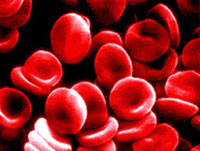 But even though the first experiments in blood transfusion were a success, the method did not get widely spread basically because it was a too difficult operation from the technical point of view. And also, some patients had complications after blood transfusion, and some instances were fatal.

As it turned out later, the complications after animal blood transfusion arose because human blood serum agglutinated and destroyed animal haematocytes. Bacteriologist Landsteiner from Vienna employed the knowledge in 1901 to discover the law of agglutination of red blood cells of one human with other man’s serum. Doctor Jansky from Poland made a similar discovery in the medicine field six years later. So, as a result of the discoveries mankind was divided into four groups depending upon their blood groups: 0 (I), A (II), B(III) and AB (IV).

When positive and negative rhesuses were discovered the number of groups increased to eight. Today, experts discern over 250 varieties of blood groups that make up 25 systems. It is known that the first blood group is the most ancient; other blood groups developed from the first one during evolution. About fifty percent of the planet’s population belongs to this type. 30-40 percent of people on Earth have the second blood group, while 10-20 percent has the third and just five percent have the fourth blood group.

Experts warn that the antigen A variants must be taken into consideration during blood transfusion as it may entail some complications. There are two variants of the antigen A, A1 and A2; and people can have not the blood type A (II) but A2 (II), not AB (IV) but A2B (IV). 80 percent of Europeans belong to the A1 subgroup and the rest twenty percent – to the A2 subgroup. The fact is really very important as people of the A2 subgroup may have antibodies against A1. Besides, there is the antigen B that influences the blood structure as well.

When blood of an alien group gets into vessels, native red blood cells begin to agglutinate and that results in blood clots and blood coagulation. These are rather serious problems for patients.

The compatibility of blood groups has been one of the most burning problems until recently, and it is hopefully solved. Henrik Clausen from the University of Copenhagen and his colleagues from universities of France, USA and Sweden and also from the American company ZymeQuest developed a unique method for converting any blood type into the 0 blood type that can be transplanted to any patient.

The authors of the discovery published in the journal Nature Biotechnology in April state that “an enzyme extracted from green coffee beans can remove the antigen B from the surface of red blood cells”. Lack of effective enzymes was the key problem why the technology has not been yet put into practice.

The international group of researchers has discovered that the enzyme of Bacteroides fragilis can remove the antigen B, and the enzyme of bacteria Elizabethkingia meningosepticum destroys the antigen A. So, a special solution that contains the discovered enzymes can help convert blood of the A, B and AB types into the universal 0 group to save millions of patients.

It is known that animal blood was used as medicine for humans centuries ago. Hippocrates recommended that patients suffering from mental diseases should drink blood of healthy people. Works by Plinius and Celsus mention treatment with the help of blood as well. They say that people suffering from epilepsy and the aged drank blood of dying gladiators.

It was believed that blood had a rejuvenating effect. In Rome, the very old Pope Innocentius VIII drank a drink made of blood of three ten-year-old boys. But the drink did not help, and the Pope died soon.

People in ancient times were sure that blood was a miraculous liquid that could make people’s lives much longer. They said that patients who shed blood should drink blood to feel well.