Scientists in England are trying to determine why some frogs in a river in Peterborough have five legs, the first known occurrence in Britain. 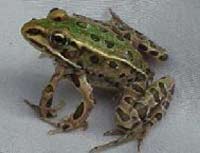 The discovery was made by naturalist Sharon Harris, who said she also spotted one frog with only three legs, the Peterborough Evening Telegraph reported.

'I was amazed to see them swimming about,' Harris said. 'They are fully grown, but they`ve got extra limbs growing out their legs.'

She contacted the Natural England environmental agency, and amphibian expert Jim Foster inspected the frogs. He said similar cases had been reported in the United States, United Press International.

'It`s hard to say why it`s happened, but scientists in the U.S. say this type of limb deformity is caused by a parasite, which invades the frogspawn and disrupts normal growth patterns,' Foster said.

'One of the reasons for the smaller, or missing limbs, could be as a result of the warm temperatures we had this winter, leading to tadpoles hatching early,' she said.

Five-legged frogs have previously been seen in the US.

"It would be interesting to hear from anyone who has seen them," said the spokeswoman of Environmental agency Natural England.

"We are not sure what the reason is. A parasite; pollution - they are possibilities. But we've reached no conclusions."

Research in the US suggested the deformity might be caused by a parasite which attacks frogspawn and disrupts growth patterns, sky.com reports.

"The frogs must be one or two years old, so whatever happened didn't happen this year."