Monster's remains are found in Peru

Fossils of the gigantic crocodile were found in the Amazonian jungle

Fossils of the gigantic crocodile were found in the Amazonian jungle. It is said to have been 41 meters long.  The expedition was financed by the French - the University of Toulouse and Deyanlay Company. 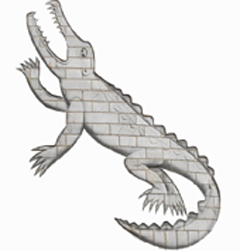 A group of twelve paleontologists discovered the animal's skeleton, jaw and teeth in the northern part of Peru in the Amazon River basin. As scientists preliminarily estimate, the crocodile weighed about nine tones. The length of its skull is startling. It is 1,3 meters.

Experts from the National Museum for the Archaeology, Anthropology and History of Peru say that the discovery proves the theory, according to which there was a large inland sea where the largest rainforest is located nowadays and it could have been connected to the Caribbean Sea.

Scientists are sure that the Andes that emerged from the so-called Andean geosynclinal belt blocked river Amazon's way. As a result the sea was formed, Korrespondent reports.

It should be noted that the discovery is just the second of such fossils that have been found for the past 30 years. After paleontologists examine the bones of the animal, the crocodile will be put on display at the National Museum for Archaeology, Anthropology and History of Peru.